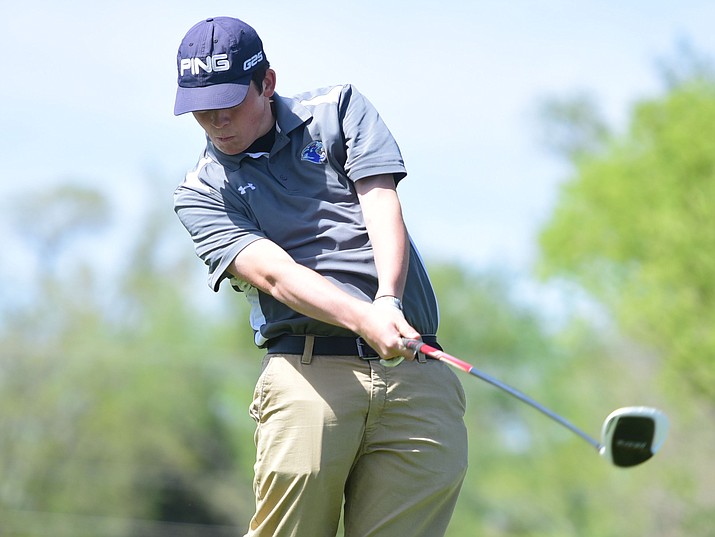 Chino Valley’s Wyatt Dodds tees off as the Cougars take on Wickenburg April 19, 2017, at the Antelope Hill Golf Course in Prescott. Dodds is a four-year varsity returner for the Cougars this season. Chino Valley’s 2018 season gets underway Tuesday, March 6, 2018, in Sedona. (Les Stukenberg/Courier, File)

The Chino Valley golf team has their first match at Oak Creek Country Club today in Sedona against the Scorpions, Camp Verde and Northland Preparatory.

The team is looking to have a great season this year, said Coach Jerry Behm. Leading the team this season is senior Wyatt Dodds, who is playing his fourth year on the team, Behm said.

“His progression has been absolutely phenomenal, having never played before,” he said. “He joined us four years ago, he’s now shooting well into the low 40s on a consistent basis.”

Not only that but Dodds’ attitude and demeanor make him a real team leader, Behm said. Another top returner is Jeffrey Shumate, senior who has been golfing for three years, he said. Shumate is a positive young man willing to listen to advice, is very coachable and making tremendous improvement, Behm said.

There’s also sophomore Bradley Evans, a second year layer, he said. He’s returning three to 4 inches taller than he was a year ago and it’s enabled him to have a bigger swing and get more distance on the ball, Behm said.

There are a few newcomers this year and leading them is sophomore Keller Rock, who is extremely athletic, Behm said.

“He’s a wrestler, one of the best wrestlers on the Chino Valley wrestling team,” Behm said. “He has an extremely viable work ethic. He’s out there continuing to practice on his own on days that … we can’t practice because of the weather, he’ll go out there on his own.”

Freshman Tanner Deskins is another newcomer to watch, he said. He’s very eager to do well and has a very good grip on the fundamentals of golf, Behm said.

Finally, there’s senior Felicity Stickrod who is a pure athlete, he said.

“She has picked up the game so tremendously quickly it’s unbelievable,” Behm said. “She’s going to be challenging for the number two or three position in about a month.”

Behm said that to him, the really tremendous part of this year is it’s the greatest step the team has ever had in his seven years at Chino Valley. There are other newcomers who are going to be pushing for the starting position in four to six weeks and the next two or three years look really good, he said. There’s a close chance the team could go all the way this year, even though there’s tough competition in Division III, especially from the private and parochial schools with students who have been exposed to golf for many years, Behm said.

Behm also said he’s fortunate this year to have Sarah Freeman as a volunteer assistant coach. The two have known each other for a number of years ever since she was a state champion in Division III, he said. Freeman was head coach at Estrella Foothills and took their team to a few state matches and has since relocated to Prescott, Behm said.