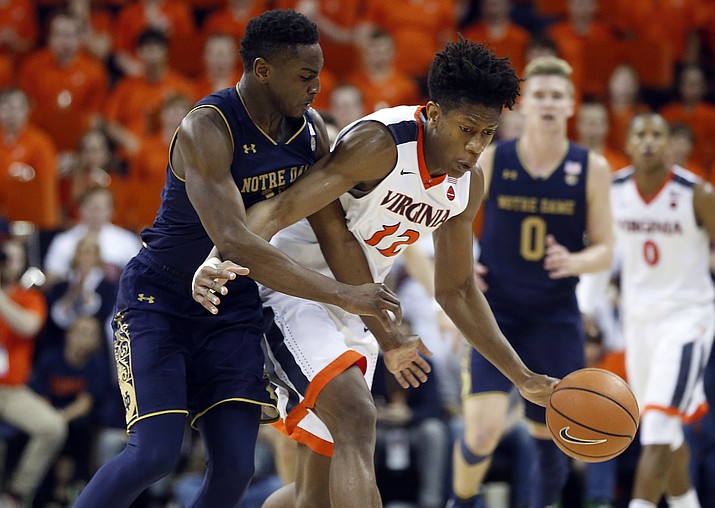 NEW YORK — In an era of bloated conferences, the first day of most league tournaments is reserved for bottom-of-the-standings teams that are hoping for a long shot championship run to an automatic NCAA Tournament bid, but are usually just playing out the string or angling for the NIT.

At the Atlantic Coast Conference Tournament this week, however, the most interesting team in the field might just be the 10th seed.

Notre Dame comes to Brooklyn with an 18-10 record (8-10 ACC), but a team that looked as if it could compete with anybody in the country in 16 games (12-4) when preseason All-American Bonzie Colson was healthy enough to play.

What are the Fighting Irish's prospects for an at-large bid to the NCAAs?

"It's an interesting question," Notre Dame coach Mike Brey said Saturday after the Fighting Irish lost at No. 1 Virginia by five. "We are probably one of the harder ones to analyze. Now, we have to do some work in Brooklyn to put ourselves on the docket. But we're in there. They have to look at us."

The Cavaliers, the unanimous No. 1 team in the latest Top 25 poll, are also the top seed in the ACC tournament after running away with the conference by four games and coming a couple of points short of a perfect league record.

Coach Tony Bennett's team enters the tournament looking to win it for the second time in five seasons and with an NCAA No. 1 seed all but locked up.

Maybe the most intriguing thing about Virginia this week will be the status of guard Kyle Guy, who sprained his left knee in the finale against Notre Dame but told reporters on Monday he expects to play in Brooklyn.

Virginia, second-seeded Duke, third-seeded Miami and fourth-seeded Clemson don't play in Brooklyn until Thursday, having earned a double bye. Duke is also a contender for a No. 1 seed in the NCAAs. The Blue Devils remained at No. 5 in the poll.

Colson broke his foot in late December and missed 15 games. Without him, the Irish went 6-9 with a seven-game losing streak. During that time, point guard Matt Farrell also missed games with an ankle injury.

Notre Dame sits at No. 65 in the RPI and has a 2-8 record against Quadrant 1 teams, with wins against Wichita State in the Maui Invitational and at Syracuse.

Colson had 24 points and 15 rebounds against Virginia.

"Our numbers are good, and one thing I'm very happy that the committee saw today is Bonzie Colson is obviously back," Brey said. "He is back and with him we have a chance, but we need to get going in Brooklyn. I hope we can give them a few more wins so that we are really debated in that room."

Things to know about the ACC Tournament, which is in the second of a two-year stay in New York before returning to North Carolina next year.

North Carolina (22-9) went from the possibility of claiming the No. 2 seed by winning at Duke — and earning a double-round bye into the quarterfinals — to sliding into the No. 6 seed and opening play Wednesday against either Syracuse or Wake Forest.

The Tar Heels, ranked No. 12 in the poll, won the tournament in 2016, but fell to rival Duke in last year's semifinals, though that North Carolina team went on to win the program's sixth NCAA championship. "Brooklyn's another chance for us to get rolling going into the tournament," senior Theo Pinson said after Saturday night's loss at Duke's Cameron Indoor Stadium.

PACK ON A ROLL

North Carolina State (21-10) had been picked to finish 12th in the league under first-year coach Kevin Keatts, but the Wolfpack stunned everyone. There was a win against then-No. 2 Arizona in the Battle 4 Atlantis tournament in the Bahamas, along with a win against Duke in January.

The Wolfpack also beat a Roy Williams-coached UNC team in Chapel Hill for only the second time in Williams' 15 seasons. "I'm excited about the way we're playing," Keatts said after Saturday's win against Louisville. "Winning five out of six games to end the regular season, that says you're playing very good basketball."

The Panthers are only the seventh ACC team to go winless through regular-season play, and the second to do it in an 18-game schedule (Boston College, 2016).

Pitt has lost 22 straight ACC regular-season games going back to last season, four short of Clemson's record of 26 from 1954-56. Tuesday's game could be the last at Pitt for second-year coach Kevin Stallings.