Women of Distinction: Arizona Women’s Hall of Fame
Days Past

A collage of some of the women who have been inducted into the Arizona Women’s Hall of Fame.

“Well-behaved women seldom make history.” This quote is attributed to American history professor Laurel Thatcher Ulrich whose life’s work is devoted to recovering the history of women, a topic rarely featured in history books. One way the State of Arizona is recovering histories from its amazing pioneer women, as well as its current living ladies, is through the Arizona Women’s Hall of Fame.

The establishment of the Arizona Women’s Hall of Fame took place in 1979-80 when the Arizona Women’s Commission recommended to Governor Bruce Babbitt that this type of program would be an excellent way to pay tribute posthumously to the remarkable women (“Legacies”) who have played a significant role in the history of Arizona. 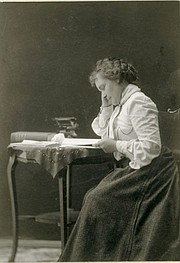 Sharlot M. Hall was one of the first women to be inducted into the Arizona Women’s Hall of Fame in the 1981 ceremony.

Funding came from the Arizona Humanities Council, the Arizona Library, Archives & Public Records and the Arizona Historical Society, which also conducted research on the nominees. These organizations, along with the Women’s Commission, staged the first induction ceremony in October 1981.

At this time, two committees were formed: the steering committee, which later became the executive committee, and the selection committee. These committees organized the inductions, from processing nomination forms to planning ceremonies. By 1991, 63 women were inducted into the Hall of Fame so their stories and achievements would be documented.

Unfortunately, in 1991 controversies struck the Hall of Fame as some legislators were upset at the induction of Margaret Sanger Slee. Although the honor was given for her work in building hospitals in Tucson, Slee’s role in promoting birth control and establishing the Planned Parenthood Federation made her objectionable to many Arizona politicians. Both monetary and political support for the Hall of Fame disappeared and inductions ceased.

For almost ten years, the only Hall of Fame activities were presentations to interested groups about the women who had been inducted through 1991. These lectures were held in the exhibit space in the Phoenix Carnegie Library. In addition, Dr. Reba Wells Grandrud and others frequently lectured on Arizona women statewide. However, as 1995 approached along with the 75th anniversary of the 19th Constitutional Amendment, which extended voting rights to women, many began questioning the status of the Hall of Fame. Interest in restarting the Hall of Fame peaked with the commemoration of the 150th anniversary of the Seneca Falls Conference of Women in 1998.

In January 2000, the Director of the Arizona State Library, Archives and Public Records made a formal presentation to its Board and was given permission to resume the Hall of Fame nomination and induction process. On October 24, 2002, the first induction ceremony since 1991 was held and three women were honored for their achievements. Since that time, the only major change that has been made to the Hall of Fame is the induction of living women or “living legacies,” which began in 2015 and included the inductions of former U. S. Supreme Court Justice Sandra Day O’Connor and Prescottonian Elisabeth Ruffner. Presently, 108 “Legacies” and four “Living Legacies” women have been inducted.

Today, a coalition of state agencies serves as the executive committee for the Hall of Fame, where representatives from the State Library and Archives, the Arizona Historical Society, the Sharlot Hall Museum, the Governor’s Office for Women and the Arizona Humanities Council review nominations, submit them to the selection committee, and plan the induction ceremonies. The next Hall of Fame induction ceremony is on May 3, 2018, at the Arizona Heritage Center or Arizona Historical Society auditorium in Tempe. For more information, and to read remarkable Arizona women’s biographies, please visit the Arizona Women’s Hall of Fame website www.azwhf.org.

To celebrate Women’s History month, Sharlot Hall Museum has invited Norma Jean Coulter and Zona Lorig of the Arizona Women’s Hall of Fame Executive Committee to give a free presentation on the women, ceremonies, and nomination process. Please join us on Saturday, March 10 at 2pm in the Sharlot Hall Museum’s West Gallery for this special lecture.