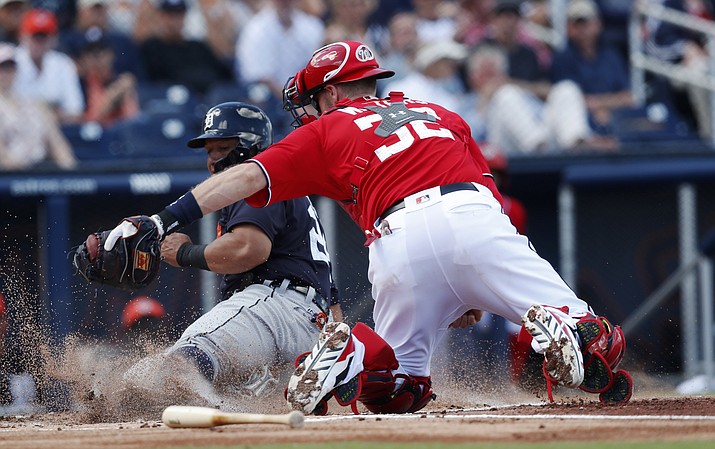 Detroit Tigers' Miguel Cabrera (24) is tagged out by Washington Nationals catcher Matt Wieters (32) as he tries to score on a Jim Adduci base hit in the first inning of a spring training baseball game, Sunday, March 4, 2018, in West Palm Beach, Fla. (John Bazemore/ap)

TAMPA — Giancarlo Stanton got off to a sunny start at a new position for the New York Yankees.

Making his first start in left field for his new team, the NL MVP lost two flyballs in the sun and both fell for hits Sunday in a 9-1 loss to the Tampa Bay Rays.

Stanton never played left field in his eight seasons with the Marlins, instead spending his time in right.

Asked how someone should work on catching balls in the glare, the smiling slugger said: "Get sun vision gloves, see right through the sun."

Adam Jones hit a pair of RBI doubles and a single and Manny Machado added a two-run double for Baltimore. Andrew Benintendi and Rafael Devers hit back-to-back homers for Boston off Gabriel Ynoa, who allowed six runs in two innings.

The Orioles announced first baseman Chris Davis had an MRI on his sore right elbow and no structural damage was found. Manager Buck Showalter estimated Davis would be out another three to five days. Showalter also noted top prospect Austin Hays should be ready to play next week after missing time with a sore right shoulder.

Trea Turner got two hits and scored for a Washington split squad. Steven Matz was again tagged in his second start for New York, giving up five hits and two walks while retiring just two batters. Matz, returning from surgery on his left elbow that cut last season short, has allowed up 10 runs in 1 2/3 innings this spring. Jay Bruce and Todd Frazier both hit their first spring home runs for New York.

The Mets announced that expected opening day starter Jacob deGrom threw a 40-pitch bullpen session and felt no ill effects from the back stiffness that sidelined him for several days.

Josh Harrison had two hits after an 0-for-9 start for Pittsburgh. Jameson Taillon made his second start for the Pirates and pitched 2 2/3 innings, giving up two runs on two hits and a walk.

Reigning AL Rookie of the Year Aaron Judge got his first hit of the spring, a first-inning single against Tampa Bay starter Nathan Eovaldi, who pitched two shutout innings.

Yankees closer Aroldis Chapman made his first appearance and retired one of the three batters he faced. Mallex Smith had three hits, including a single off Chapman.

Toronto ace Marco Estrada made his second start and pitched three shutout innings, allowing one hit while striking out three. Blue Jays closer Roberto Osuna fanned one in a perfect fifth in his first appearance.

Jeimer Candelario tripled in a run for Detroit.

Atlanta starter Mike Foltynewicz gave up one hit in three scoreless innings. Freddie Freeman had two hits for the Braves.

Jason Kipnis hit his fifth home run for Cleveland. He leads all big leaguers in homers and RBIs (10) this spring. Kipnis hit 12 homers in an injury-interrupted season after hitting 23 the year before.

Chicago starter Carson Fulmer, hoping to earn a back-of-the-rotation spot, lasted just one inning in his second start. He gave up four runs on four hits and four walks. Welington Castillo and Adam Engel homered for the White Sox.

Seattle starter James Paxton struggled, giving up seven runs and seven hits in 1 2/3 innings. Robinson Chirinos homered to lead off the second for Texas and Ryan Rua capped the six-run inning with a three-run drive.

Doug Fister debuted on the mound for the Rangers and pitched three shutout innings, allowing two hits and a walk.

Jason Hammel made his first start for Kansas City, striking out two in two perfect innings. Jorge Bonifacio had two hits and drove in two runs.

Mike Trout and Albert Pujols both went 0 for 3 and are still looking for their first hit this spring. Justin Upton homered and drove in three runs for Los Angeles. Matt Shoemaker allowed three runs on four hits and a walk in 2 1/3 innings.

Nolan Arenado had a hit and stole a base for Colorado.