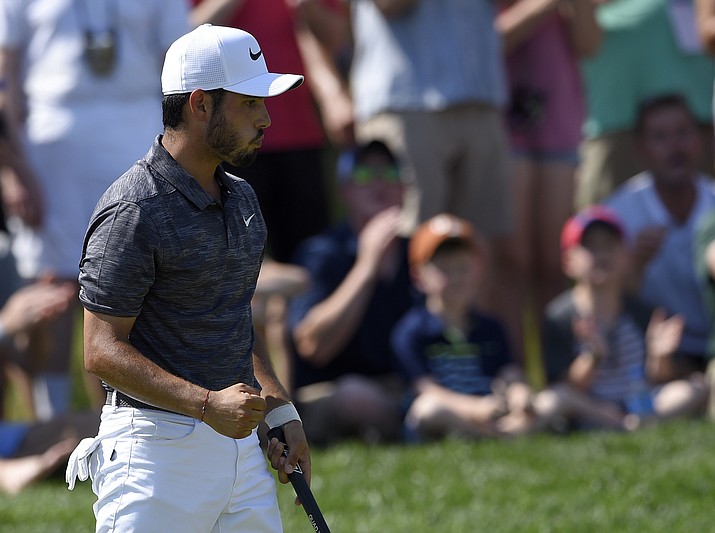 Abraham Ancer, of Mexico, reacts after his putt on the 16th green during the third round of the Quicken Loans National golf tournament, Saturday, June 30, 2018, in Potomac, Md. (Nick Wass/AP Photo)

POTOMAC, Md. — The cheers were so loud for Tiger Woods that no one could hear the starter announce the name of Joel Dahmen when it was his turn to hit.

And then it got even rowdier Saturday at the Quicken Loans National with each putt Woods made — 12 feet for par, four in a row for birdie, a 25-foot birdie putt on the ninth hole to head to the back nine just two shots out of the lead.

Abraham Ancer heard it all in the group ahead, and it carried him into a share of the 54-hole lead.

Ancer had the lowest round of his PGA Tour career, an 8-under 62 on the TPC Potomac at Avenel Farm, and wound up atop the leaderboard with Francesco Molinari (65).

“The crowds were absolutely amazing. Every hole was packed,” Ancer said. “I just drew on that. I just heard all the roars. He was making a lot of putts on the front nine. The roars were crazy. I just wanted to be one step ahead of him. So it worked out.”

It worked out even better than that.

Ancer, a 27-year-old Mexican, had never been among the top 10 going into the final round in his previous two starts. Now he’s one round away from his first PGA Tour victory, which is a lot longer than it looks. Molinari, a two-time Ryder Cup player with a World Golf Championship among his credentials, overcame a few putts he missed from short range to close with two birdies to join Ancer at 13-under 197.

Woods lost all momentum on the back nine by missing two birdie chances inside 10 feet, taking a bogey on a short par 4 and then driving just through the green on the reachable 14th to 18 feet, chipping strong to 8 feet and missing another birdie chance.

He had to settle for a 68 and was six shots behind, making this the seventh straight tournament he has been at least five shots behind going into the final round.

It sure didn’t sound that way, and for most of the round, it didn’t look that way.

“It was frustrating because I played better than what my score indicates,” Woods said. “I thought that 10 under would have been a good score for me to end up at for the day, and I could have easily gotten that today on the back nine.”

The nine players ahead of him have combined for just five (official) PGA Tour victories. That includes Molinari, a five-time winner in Europe who is No. 17 in the world. He won the HSBC Champions in Shanghai in 2010, before the PGA Tour recognized it as an official victory.

The Italian is playing at the National and plans to be at the John Deere Classic in two weeks, even though the European Tour is in the meat of its summer schedule with national opens in France, Ireland and Scotland leading up to the British Open. Molinaro is currently among qualifiers for the Ryder Cup team, but his FedEx Cup standing is at No. 123.

He’s making the most of his first trip to the TPC Potomac. Even though he missed a few short putts on the front nine, he closed with a 30-foot birdie putt on the par-3 17th and hit wedge into 5 feet for birdie at the 18th.

“It’s where I want to be,” Molinari said, referring more to his position on the leaderboard than in heat approaching 100 degrees. “I would have been happy with even 11 or 12 under. The main thing today was to stay close to the leader, so I’ve done a very good job of that. Tomorrow I just need to go out and do my best, hit as many good shots as possible and see if that would be enough.”

Ancer was tied for the lead after the opening round at the Memorial, which is the only other time he has been atop the leaderboard after any round on the PGA Tour. Conditions have been changing since the opening round with so much sun, no rain and fairways that are getting faster. That was more bothersome to Ancer than the heat.

“I grew up in Mexico, in the north part of Mexico where it’s very hot,” he said. “Didn’t bother me. I would rather play in this than cold weather.”

The course certainly has everyone’s attention.

Woods found that out the hard way with three shots from the rough that sailed some 30 yards over the green, leading to bogeys.

“You have to hit it good. There’s no way around it,” Ancer said.

Armour shared the 36-hole lead with Beau Hossler and Brian Gay, who both failed to break par. Hossler shot a 71 and was five shots behind, while Gay had a 72. Rickie Fowler, the only player from the top 10 in the world at the TPC Potomac, had a 69 and was eight shots behind.