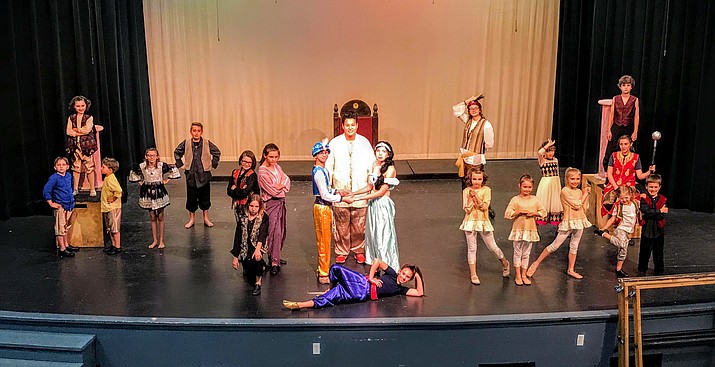 One Stage Family Theatre is putting on three showings of Disney’s “Aladdin Jr.” this weekend, the first time the company has ever put on a Disney show, said Co-Director Tamee Niekamp.

The idea to do Aladdin Jr. actually came from the kids who wanted to do it for the summer show, Niekamp said.

Showtimes are at 7:30 p.m. Friday, June 29, and at 4 and 7:30 p.m. Saturday, June 30, at Franklin Phonetic School, 6116 E. Highway 69. Tickets are $12 for adults and $6 for children younger than 5 and can be purchased at the door or by messaging One Stage Family Theatre on Facebook at www.facebook.com/onestagefamilytheatre.

Everyone in the cast is younger than 18, with the youngest being 3 and the oldest having recently turned 16, Niekamp said. Aladdin, played by Tristan Hepker, is 15, she said.

Usually, the kids aren’t able to get onto the big stage until a couple days before opening night, but they’ve been able to be there a week early because school’s out, Niekamp said, adding that it’s been a neat opportunity for them to see the set come alive.

While Disney versions of the shows are supposed to be only an hour long, this one will have an intermission and be about an hour and a half, Niekamp said.

Other members of the crew include Shana Lujan as musical director and co-director, Lexe Niekamp as choreographer, and Nolan Charles as assistant director. Charles’ last performance in Prescott was in “Footloose” five years ago before he left to perform in Disneyland and now he’s back, Tamee Niekamp said.

New theater company puts on ‘Tale of Beauty and the Beast’
One Stage puts on ‘Mamma Mia!’
One Stage goes to Narnia
It's a Wonderful Life with One Stage Family Theatre
‘Secret Garden’ raises funds for nonprofit