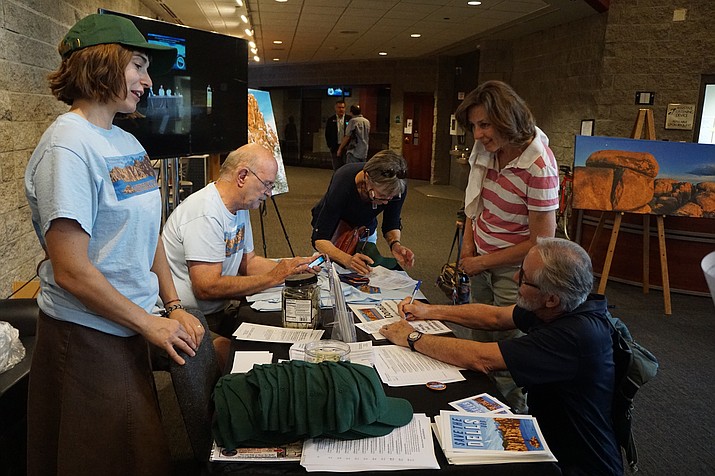 Save the Dells volunteer Sommer Dunn, left, and organization treasurer Rod Moyer talk with Prescott residents Barbara and Norman Caouette, right, after a Save the Dells rally at the Yavapai College Performing Arts Center Monday night, June 25. Attendance at the rally was estimated at more than 1,200. (Cindy Barks/Courier)

In the largest applause point of the night, Save the Dells Chairman Joe Trudeau challenged the current Prescott City Council to do what he said past councils had failed to do: Preserve the heart of the Granite Dells.

The comment was just one of a number of views that brought many in the audience to their feet, cheering, during a Save the Dells rally at the Yavapai College Performing Arts Center Monday night, June 25.

“I’d like to think that today’s City Council and our mayor can take a position to make right this lost opportunity,” Trudeau said, referring to past council decisions not to devote more of the city’s open-space/street-improvement sales tax money to buying and preserving the scenic area around the Granite Dells’ Point of Rocks.

Rather, Trudeau said, the city chose to put the bulk of revenue from the tax toward street improvements. He was especially critical of the 2010/2011 move to put $17 million into building the Highway 89A/Granite Dells Parkway interchange.

Trudeau maintains that the city’s focus on streets over open space allowed development company Arizona Eco Development (AED) to buy the iconic Point of Rocks land as a part of a massive acquisition of ranchland northeast of Prescott.

Now, with Arizona Eco proposing a 3,300-home development on parcels north and south of the Granite Dells Parkway interchange, the Save the Dells group is pushing for preservation.

“Let’s save the heart and soul of this town,” Trudeau said.

The group has identified about 500 acres that they say should be protected along the Peavine and Iron King trails near the Point of Rocks.

Interest in Arizona Eco’s plans has grown since a May meeting that attracted about 400 people to Prescott City Hall.

This week, more than 1,200 people filled the Yavapai College auditorium.

Trudeau emphasized that required city review of Arizona Eco’s plans would be lengthy and would allow for plenty of community involvement.

The multiple Prescott Planning and Zoning Commission and City Council discussions that will take place on the project could last well into the fall, Trudeau said.

He urged audience members to continue their involvement, and to let city officials know their views about the project.

Among the speakers at the Monday event was Prescott Mayor Greg Mengarelli, who emphasized that Arizona Eco has yet to submit its formal application for annexation into city limits.

After that happens, Mengarelli said, the city is prepared to negotiate to save as much of the Dells area as possible, noting that the goal would be to find “common ground” among the various parties.

After the meeting, Mengarelli said the “common ground” likely would involve determining a process for preservation.

“I think there’s a desire from everybody to see something that’s such a natural icon preserved,” he said. “It’s really how you do that and how do you create a funding mechanism?”

And of Trudeau’s suggestion that the current council should “make right” past City Councils’ actions, Mengarelli said, “We have to live and make decisions in the present, and so that’s what this council’s going to do – really look at what options we have with the application that comes in, and work with the developer to get the best deal we can.”

While the two previous Arizona Eco meetings were conducted by developer Jason Gisi, this week’s meeting was a rally sponsored by Save the Dells.

Gisi, who was out of town Monday and not in attendance at the meeting, said by telephone on Tuesday that he had anticipated and understands the level of community emotion about the Point of Rocks land. “I am keenly aware of and absolutely share the desire to minimize the impact on the viewshed,” he said.

But, Gisi added, “What I don’t understand is ‘What is the actionable plan (for the proposed regional park)?”

Trudeau has suggested that the city should negotiate preservation of the core Granite Dells land in exchange for allowing Arizona Eco to build more homes per acre on the flatter land to the north.

Gisi said he expects that concept to be explored during the annexation process.

“We’re going to apply for annexation, and it will turn into a negotiation,” he said.

That process could begin as soon as the coming week, Gisi said, noting that he expects to file the formal annexation application within the week.