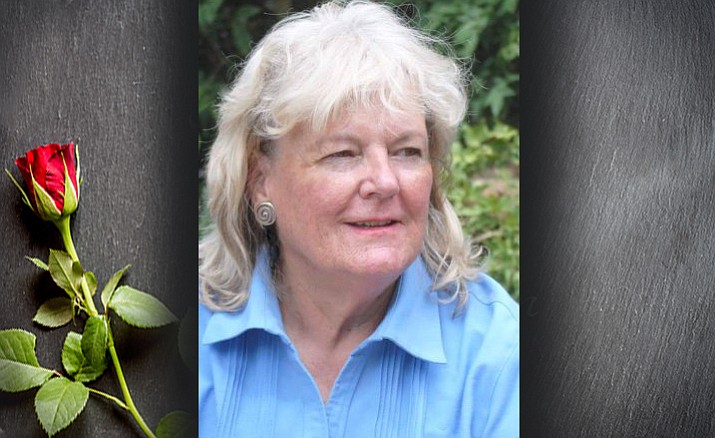 Cynthia Margaret Rigden passed away on June 5, 2018, from ALS (amyotrophic lateral sclerosis). She was born in Prescott, Arizona, on Sept. 28, 1943, to John Thomas Rigden and Margaret Kester Hays Rigden.

She grew up on the Rigden Ranch in Kirkland where she resided until her death. Cynthia was a third-generation cattle rancher and artist. She attended Peeples Valley and Kirkland Elementary Schools and graduated from Prescott High School in 1960.

She then attended Arizona State University, majoring in art and agriculture. After Cynthia’s father lost his eyesight from diabetes, she left college to return home to help run the ranch. While living on her family’s cattle ranch, Cynthia pursued her artistic career, becoming well-known nationally and internationally for her paintings and sculptures of animals.

Cynthia’s artwork has been featured in Arizona Highways, Art of the West, Cowboys and Indians Magazine, Contemporary Western Artists, Phoenix Home and Gardens, Southwest Art Magazine, The Texas Cowboy, Western Art Collector, and Barbara Van Cleve’s book, Hard Twist - Western Ranch Women. Known for its impeccable precision and unique beauty, Cynthia’s work has been exhibited in the Prix de West Invitational Art Exhibition and Sale at the National Cowboy and Western Heritage Museum in Oklahoma City, and Sculpture in the Park in Loveland, Colorado. In 2009, her piece entitled Crowded was chosen for the permanent collection of Brookgreen Gardens in Murrells Inlet, South Carolina. She also exhibited at the Mountain Oyster Club in Tucson, Arizona, and was a signature member of the American Academy of Equine Art. Her work can be found in private collections throughout the world, including that of John Wayne. His collection is now housed at the National Cowboy and Western Heritage Museum in Oklahoma City. Cynthia exhibited every year at Cowgirl Up! Art from the Other Half of the West since it began in 2006 at the Desert Caballeros Western Museum in Wickenburg, Arizona. Her work is in the Desert Caballeros Western Museum’s permanent art collection and she also taught sculpture workshops at the Museum. Cynthia most recently received the Desert Caballeros Western Museum’s “Heart of the West - Lifetime Achievement Award” in January of 2018.

Cynthia’s artwork has been represented by galleries across the country, including Trailside Galleries of Scottsdale, Arizona and Jackson, Wyoming; Claggett-Rey Gallery in Vail, Colorado; and Broadmoor Galleries in Colorado Springs, Colorado.

Cynthia’s avid interest in art and history led her on many trips overseas. While in college, she spent a summer studying art in Florence, Italy. She later spent countless hours touring England and Europe. Her knowledge of art, history and antiquities was boundless. As a rancher, Cynthia followed her father’s and grandfather’s (Charles Lewis Rigden) lead by raising Hereford cattle. In the late 1960s Longhorns were added to the herd after the gift of a Longhorn cow and calf from Charles Wetzler of Circle One Livestock, a feedlot located at Lizard Acres (now known as Sun City, Arizona). She continued a cross-breeding program of Herefords and Longhorns, later including Beefmasters. She rode the ranch and worked the cattle on Thoroughbreds, many of whom were retired racehorses. It was these horses and her purebred Longhorn steers, with their enormous horns, that served as models and inspiration for her artwork. Cynthia was actively involved in Arizona’s cattle industry. As a member of the Arizona Cattlemen’s Association, she served as board member on the Arizona Cattle Industry Research and Education Foundation. She also served as President of the Yavapai Cattle Growers Association, following in the steps of her father, Tom Rigden, grandfather, Roy D. Hays, and uncle, John Hays.

Cynthia is survived by her brother, Charles Rigden of Aguila, Arizona; her sister, Anna Mary Glaab and brother-in-law, Rigoberto Morales of Peeples Valley, Arizona; nephews, Tom Rigden and his wife, Elaine, of Prescott, Arizona, and Rigden Glaab of Bismarck, North Dakota; great-niece, Ava Glaab of North Dakota; great-nephew Toren Glaab of Maryland; many cousins on both sides of her family; and her longtime “ranch family,” Carlos and Maria Aranda, and their daughters, Analizeth, Abril and Alexa. She was preceded in death by her parents, Tom and Margaret Rigden.

According to Cynthia’s wishes, no public services will be held.

A private celebration of her life will take place later in the year. The family asks that, if you desire, please make donations in Cynthia’s memory to the Sharlot Hall Museum, where she had served on the Board of Directors, at 415 W. Gurley St., Prescott, AZ 86301 (www.sharlot.org).