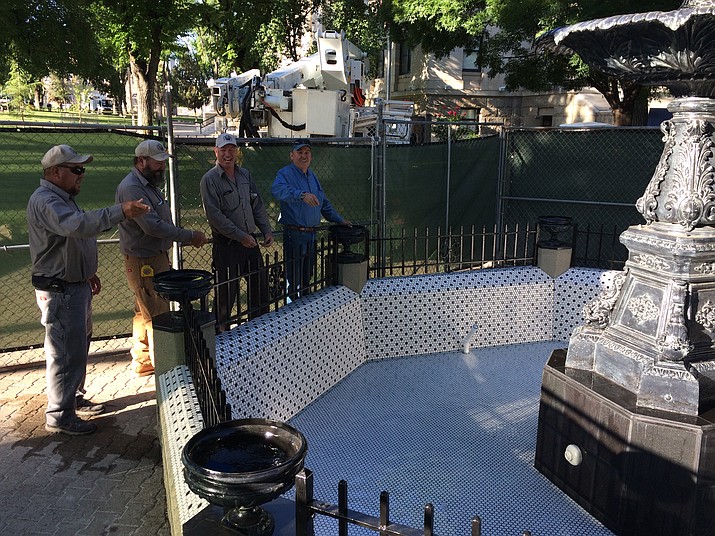 Yavapai County Facilities Department employees toss inaugural coins into about 4 inches of water June 26 as the newly restored fountain fills up. It will be officially unveiled at 2 p.m. Friday, June 29. (Sue Tone/Courier)

Editor's Note - This story refers to when county staff placed the statue back atop the courthouse plaza fountain. However, the official unveiling is set for Friday, June 29. The ceremony will be at 2 p.m. and, in addition to several members of the Yavapai County Board of Supervisors, attendees will include Fred Veil, Sharlot Hall Museum executive director; Honorable Judge Mackey, Superior Court Presiding Judge; and state Sen. Karen Fann.

Greek goddess on her way to Alabama for restoration

Lady Ermintrude is back in town! Yavapai County facilities staff set the statue in place atop the fountain at 6 a.m. Tuesday, June 26. Then, with about 4 inches of water filling the basin, they threw in the inaugural coins.

It was an October 2016 article in The Daily Courier reporting on the disintegrating cast iron bowls and rusty broken base that reached the attention of Robinson Iron, a family owned foundry in Alexander City, Alabama.

Owner Luke Robinson said he often Googles “cast iron restoration,” and to his delight, up popped the Courier article.

“He called me and said, ‘I can fix that,’” said Terry Vallely, Yavapai County Building Maintenance Supervisor.

Turns out the foundry had the molds for the original fountain obtained by Robinson’s grandfather; and with $30,000 approved by the county board of supervisors for repairs and shipping, the Lady headed down south.

“We know a lot of fountains with history like this. We were able to use 90 to 95 percent of the fountain pieces,” Robinson said about the restoration work.

He found it unusual to have one a century old coming from as far west as Arizona.

“Before television and cellphones and the internet, everybody used to gather someplace downtown,” Robinson said. “A lot of times that place had a historical landmark, and more often than not, the historical landmark was a fountain.”

Vallely and his wife Kathy accompanied Lady Ermintrude on her way back to Prescott.

“She rode home in our bed in our motor home,” Kathy said Tuesday morning. “We wanted to make sure she was OK.”

Lady Ermintrude now stands with a fresh coat of shiny white paint on double cast iron bowls set in a newly tiled basin designed to match the tile work on the interior floors of the courthouse.

An official unveiling ceremony will take place at 2 p.m. Friday, June 29, at the fountain on the northeast corner of the courthouse plaza near Gurley and Cortez streets.

Speakers include Sen. Karen Fann, who will recite a written message by Elisabeth Ruffner. Ruffner personally knew Dr. Florence Yount, the first female doctor in Yavapai County in the 1940s; Dr. Yount gave the fountain its name in 1910 when it was first erected.

Executive Director Fred Veil from Sharlot Hall Museum will talk about the time Lady Ermintrude spent with the museum and how Yavapai County got her back on loan.

In the 1970s the late Prescott attorney Jim Musgrove entered Lady Ermintrude’s life, and Jim’s wife, Myra, will be present.

Judge David Mackey will speak, and then Van Keuren will ask for a drum roll and for the unveiling of the fountain.

Also present will be the Shady Ladies, Prescott Regulators and members of the Elks Opera House Guild in period attire.

Attendees are encouraged to bring some spare change to toss into the fountain. The coins are periodically collected and benefit Yavapai Exceptional Industries, which makes the plaza’s picnic tables.