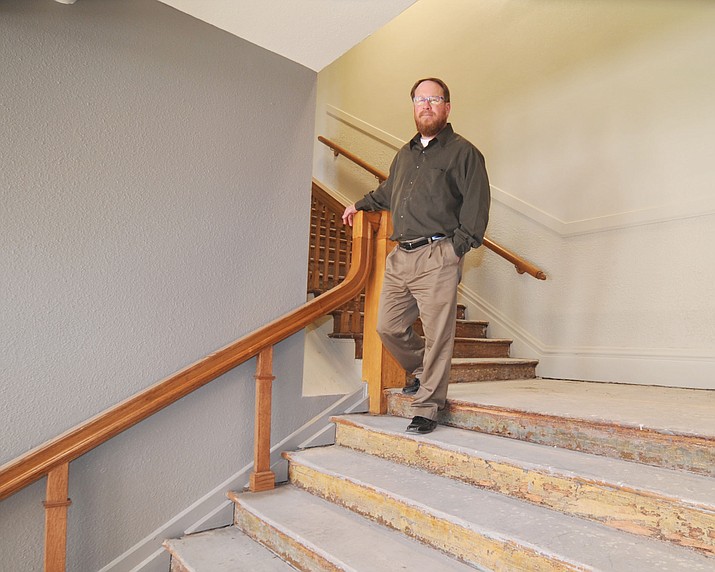 Superintendent Joe Howard walks down the main staircase earlier this year at the former Washington Traditional School that was transformed into the Prescott Unified School District offices. (Les Stukenberg/Courier)

Prescott Unified School District Superintendent Joe Howard is heading into his third year as this city’s top educator — and he is just as enthusiastic as ever about living the motto, “Every Child, Every Day.”

The PUSD Governing Board on Tuesday night delivered Howard his official evaluation, one conducted in an almost hourlong, closed-door session. No public document was issued as a result of the session.

Howard said he was gratified by the “conversation” and appreciates the direction he was given as the district moves into the 2018-19 school year.

“I’m pretty pleased to have teams that support me as superintendent; people who I can go to for support and advice and who have a role representing the community,” Howard said of the five-member board as well as his administrative staff, including Assistant Superintendent Mardi Read and Chief Financial Officer Brian Moore.

In the last year, Howard, 47, shepherded the district through a full-district accreditation process; the sale of district properties and the renovation of the historic Washington School into a new district office; reorganized four principals and assistant principals into new duties at the middle school, high school and one elementary school; adopted a new math curriculum at the elementary and high school levels; encouraged the start of a high school freshman academy and was the sole superintendent in the area to keep schools open amid the #RedForEd movement.

Howard took a stand defending the fight for better pay for teachers and staff, but was clear he would not defend a disruption of student instruction. So he and staff liaisons worked out a compromise that enabled teachers to protest but kept schools open for two half days with a third day a previously scheduled professional development day.

Howard admitted the compromise was not one that made him the most popular guy in the room. In the end, though, he and the Governing Board concurred that he did what was best for the Prescott community that in 2015 showed considerable support for education with its $15 million bond and $6 million override. The override dollars enabled the board to give all staff a 5 percent pay hike.

At the start of Howard’s tenure, he had to oversee the closing of two schools and reconfiguring of the remaining six schools, reduction of 22 teaching positions as part of addressing a $2 million budget shortfall.

Board Chairman John Mackin was clear Howard’s performance as the district’s leader is respected by the board and the community, including parents, staff and students. He said Howard’s leadership through the #RedForEd protests were an example not just for this district, but across the state.

Through Howard’s ability to negotiate with teacher leaders, Mackin said he was able to avoid a district shutdown.

“We, wholeheartedly, feel Joe’s done a great job and the district is all the better for it,” Mackin said.

Howard’s three-year contract rolls into the next year, and he was awarded a 5 percent pay hike as were his fellow district administrators. His annual base salary is about $130,000.

The Prescott High graduate, who in May celebrated the graduation of his twin sons, Jonah and Jason, from his alma mater, counts himself blessed to work in the place where he was educated. His father, Jim, was a superintendent in the mid-1980s, including while Howard and his two siblings were in the district as students.

Prior to becoming superintendent, Howard worked in both Chino Valley and Prescott as a middle school language arts teacher, a wrestling coach and athletic director and then as the Mile High Middle School Principal for seven years before he was tapped as an assistant superintendent, and then superintendent in 2015.

Howard was honored by the Arizona School Administrators as the top superintendent in the state.

With the district now on stronger footing financially, with student populations stable, and community support evident in the growth of a local education foundation, Howard’s focus for the coming year will be on advancing instruction.

The last couple years have been focused on managing the district, and some of that must continue, but he and the board’s goals for the coming year are oriented more around advancing instruction.

He said the focus will be on the way we teach, relying on research-based methods to come up with grassroots instruction that engages students so they become better learners.

“This is a passion of mine,” Howard said.

As he reflected on his job, Howard said there is nowhere else he would rather be.

“I work with incredible people,” Howard said of his second PUSD family.

“We’ve gone through hard times together, but I am inspired by them.”