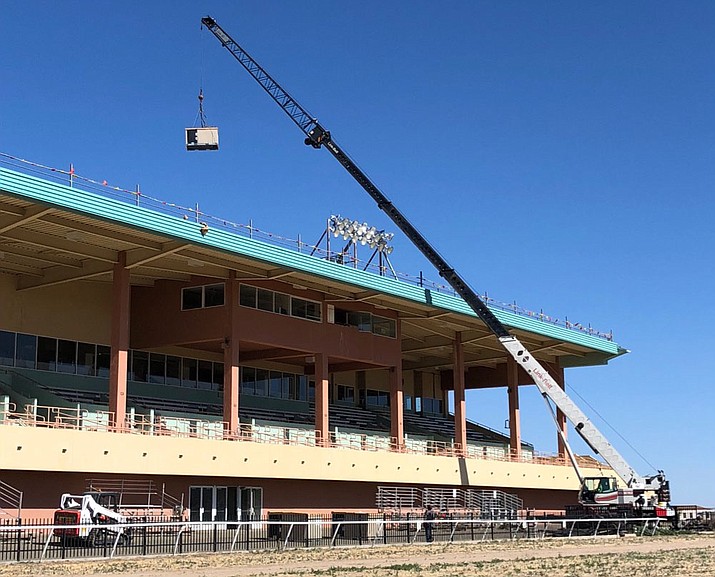 Construction crews work on improving Arizona Downs earlier this month in Prescott Valley. Formally known as Yavapai Downs, the horse track is currently going through a $2 million facelift in preparation for simulcasting in July, 2018, and live racing in 2019. (Arizona Downs/Courtesy)

And with a new look comes a new name.

Longtime racing executive Corey Johnson thanked the Herbeveaux family for allowing J&J Equine to use the name Arizona Downs, which was the name of the former racetrack in Phoenix that opened in 1951 at one site and later ran its annual race meetings by leasing Turf Paradise before closing operations in 1985.

“We want to be known as Arizona’s racetrack that benefits horsemen throughout the state,” Johnsen said. “We want a year-round circuit returning to Arizona with the resumption of summer racing, so horses and all the jobs they create stay in the state.”

Yavapai Downs, a 120-acre property on the northeast edge of Prescott Valley, last ran in 2010. The facility was purchased for $3.22 million out of bankruptcy court in January by J&J Equine, an entity formed by Phoenix-based JACOR Partners principals Tom, Dave and Mike Auther, along with partner Joe Jackson and Johnsen.

“A stronger circuit helps everyone in the industry: the breeders, horse owners, trainers, jockeys and all the related professions it takes to get a horse to the races,” Johnsen said.

J&J Equine was granted a temporary permit to conduct live racing for fiscal years 2019, 2020 and 2021. A permanent permit is pending the Arizona Racing Commission staff completing the application.