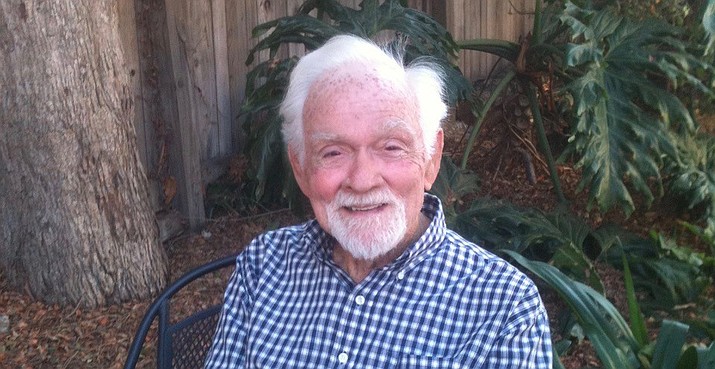 Harley Robert “Bob” Flack, age 92, beloved son, brother, uncle, husband, father and grandfather, passed away in April 2018, peacefully and painlessly at the Hospice of the Northern Arizona Veterans Affairs Health Care Center in Prescott, Arizona. He was attended in his final days by his loving son, David Flack, and grandsons, Zachary and Noah.

Bob was born in October 1925, to Leona Aldridge and Harold Flack in Terre Haute, Indiana. He was raised in Detroit, Michigan, by his mother and her second husband, Jack Tucker. He was blessed to have two brothers from this union, Chuck and Tom Tucker. He attended Henry Ford Trade School in Detroit and remembered seeing Henry Ford come through the school on visits.

Bob enlisted in the U.S. Marine Corps at the age of 17 to fight in World War II. He was stationed in California at Camp Pendleton and saw action in some of the biggest battles in the Pacific theater: Kwajalein, Peleliu and Okinawa. He was stationed in Japan during the occupation. During the Korean Conflict, Bob served as a drill instructor state-side. He was honorably discharged as a Sergeant. Bob served proudly as a Marine and that experience was a defining period of his life. Later in his life, he shared stories of his military service with his son and grandsons and shared his war experiences with high school history classes taught by his son, David. He also participated in the Veterans Heritage Project with his grandson, Zachary, that lead to a book titled, “So You Asked,” detailing his WWII experiences. The book was presented to U.S. Sen. John McCain’s office in D.C. In September 2017, he was accompanied by his son and daughter on an Honor Flight Arizona trip to visit the WWII Memorial and other military memorials in Washington, D.C. He was proud until the day he died of being a veteran.

Bob met Clarabelle (Dickie) Dowell, on the beach in Long Beach, California. They married in February 1946 in South Gate, California. They were married 65 years until her death in 2011. They moved to Detroit, Michigan after marrying and had their first child, Cheryl Lee, who died shortly after birth in December 1947. They returned to California, and bought a home in Downey. In 1953 Lauri Ann was born, followed by David Robert in 1955.

After the war, Bob worked as U.S. post man and co-owned a Flying A gas station with a Marine buddy. In 1950 he went to work for Certified Grocers of California, a wholesale food cooperative located in Commerce. The family moved to Lancaster, California, in 1958. The family moved to Santa Barbara in 1963 and bought a home in Goleta. Bob worked for Certified until 1975. After selling the house in Goleta, they lived briefly in Carpinteria. They lived for a short while (during a very cold winter!) in Detroit and quickly hightailed it for the Southwest moving first to Flagstaff, Arizona, and eventually, to Prescott in 1990. After retirement, Bob was not content to lead a life of leisure. In Prescott he was a greeter at Hassayampa Inn, a Hearing Specialist with Bell Tone and a volunteer with the U.S. Forest Service. He and Dickie volunteered at the Food Pantry in Prescott and were faithful members of the Prescott Community Church. Bob was a founding member of the Neighborhood Watch on Willow Creek Drive, and late in his life, went to the animal shelter to walk the dogs there until his mobility became a challenge.

Throughout his life Bob was very physically active, walking, running and biking. He was hiking Thumb Butte well into his seventies. He was a natty dresser, charming and sported some serious sideburns in the ’60s and ’70s.

Bob was the “fun Dad” who played endless games of catch with his children and many of their friends who regularly visited our homes and remember Bob and Dickie with affection to this day.

Bob was preceded in death by his parents; his brother, Charles; his infant daughter, Cheryl; and his beloved wife, Dickie. He is survived by his son, David (Kim) of Goodyear, Arizona; grandchildren, Zachary, Noah, Rachel and Simon; his daughter, Lauri of Ventura, California; his brother, Tom Tucker (Betty); and three nephews, Tom, Steve and Jim, all in Michigan and their loved ones and families; and his loving niece, Dyann Weber (Clarence) of Downey, California.

The family would like to thank the staff of Granite Gate Senior Living community for their kind care since 2014. We would also like to thank Dr. Roger Nutt, Meghan Anderson and the members of the VA White Team, Dr. Ralph and the VA Hospice staff, along with innumerable other VA Medical staff at Northern Arizona Veterans Affairs Health Care Center who provided compassionate medical care for Bob for the past 28 years.

At Bob’s request there was no service. His ashes were interned with his wife’s at Prescott National Cemetery. There will be a military service at the cemetery at a future date.