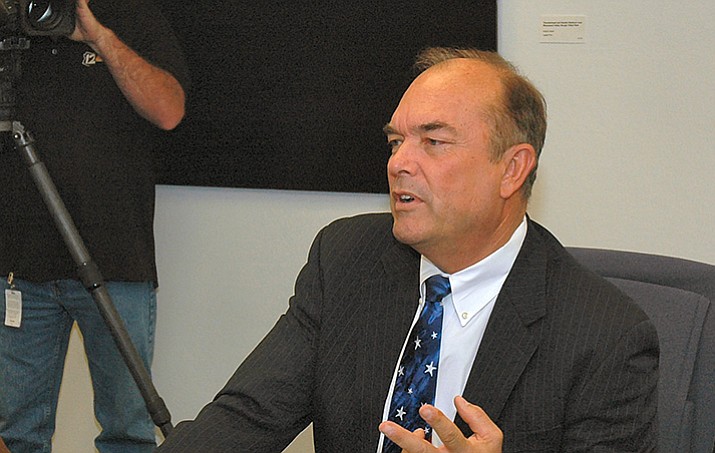 PHOENIX — Don Shooter is a resident of Yuma and is legally qualified to make a bid for a political comeback to be a senator from the legislative district that he has represented before, a judge ruled Friday.

In an extensive ruling, Maricopa County Superior Court Judge Rosa Mroz acknowledged there are a series of facts that could lead to the conclusion that Shooter’s real residence is a home in north central Phoenix and that he does not reside in the district — which stretches from Yuma to the western suburbs on the Phoenix area — as legally required.

That includes the fact that the Phoenix house is owned by a trust run jointly by Shooter and his wife, Susan, and that the home is listed on tax records as owner-occupied primary residence.

There’s also the fact that shortly after Shooter was expelled from the House earlier this year over charges of sexual harassment he not only spent most of his time in Phoenix but had his mail forwarded to the Phoenix address and the electricity at his Yuma apartment was turned off.

And potentially most damning is that the judge did not believe Shooter’s explanation that it was someone else — his attorney suggested it might even have been a political foe — who changed his registration from his South Palo Verde Drive in Yuma on April 30 to the Phoenix address that is outside the district.

But Mroz said that under Arizona law, while where a person registers to vote is “strong proof’’ of residence, it is “not conclusive.’’

And as far as the power being shut off, the judge accepted Shooter’s explanation that his wife, who pays all the utility bills, probably made that decision on her own “to save money’’ after he was ousted from the Legislature. It has since been turned back on.

On the other side of the equation, Mroz also said Shooter has maintained an apartment on South Palo Verde Lane in Yuma for more than five years.

“He considers the Yuma apartment to be his primary residence and has always intended to go back ... and remain a resident of Yuma County,’’ Mroz said.

The judge also said there was other evidence that Shooter intended to remain in the Yuma apartment, ranging from that being the address on his driver’s license and his tax returns to the fact that he continues to pay rent and the furnishings remain. He also has changed his voter registration back to the Yuma address.

She also said there were affidavits from people who visited him in Yuma as recently as a week ago.

Attorney Tim La Sota, who argued to have Shooter’s name stripped from the Aug. 28 Republican ballot for the state Senate, said he is likely to appeal. He disagreed with the judge’s conclusion that Shooter meets the legal requirements to be considered a resident of Legislative District 13.

“The residency requirements are apparently that one rent an apartment in a district and say that’s their home,’’ La Sota said. “They don’t even have to have power.’’

La Sota represents Brent Backus, who also is hoping to be elected state senator from LD 13. Backus is a resident of Waddell, an unincorporated community in western Maricopa County.

Unless overturned, it means that Shooter’s name will appear on the Aug. 28 Republican primary ballot, along with Backus as well as incumbent Sine Kerr of Buckeye. She was appointed to the seat earlier this year after state Sen. Steve Montenegro of Litchfield Park quit in an unsuccessful run for Congress.

Even if Shooter’s name is on the ballot, the litigation itself may have undermined his attempt at a political comeback: It brought into public focus how much time he spends living somewhere else.

Whoever survives the GOP primary will face off against Michelle Harris, the lone Democrat in the race.

Republicans outnumber Democrats in the district by a margin of about 3-2. But there also are nearly 44,000 registered independents out of more 124,000 people currently signed up to vote in the general election.

Shooter has a long political history in the district.

He was first elected to the state Senate in 2010 before making a successful bid for the House in 2016.

All that came to a screeching halt earlier this year when the House voted to oust him after concluding he was guilty of sexual harassment of other lawmakers, lobbyists and others. Only two other House members voted not to expel him: Republicans Noel Campbell and David Stringer, both of Prescott.