Despite cancer, McCain’s maverick ways press on in tweets 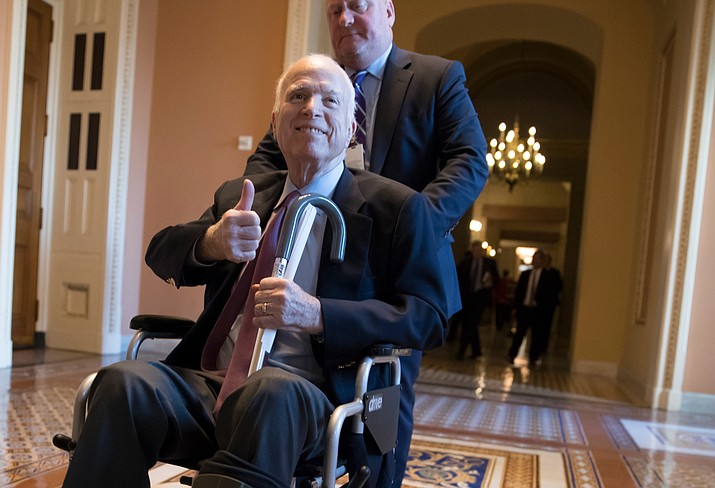 PHOENIX — Sen. John McCain’s legacy was thrust into focus nearly one year ago when he announced his brain cancer diagnosis. The six-term Senator and decorated Vietnam War veteran is now fighting the illness from his beloved Arizona, and filling the role of one of the few Congressional Republican voices to publicly rebuke Trump administration decisions.

Yet the question of what happens if McCain steps down from office before 2022 is a lingering one, casting an uncomfortable haze around the future of a seat that can’t quite ever be filled.

“John McCain is a one-of-a-kind politician, and there’s no replacing him,” said Stan Barnes, an Arizona Republican consultant. “No one serving in political office today remembers a time when John

McCain was not representing us in Washington.”

Some Arizona Republicans have criticized conversations about the future of McCain’s seat as inappropriate. But reflections around the 81-year-old statesman’s life, legacy and status as a national political figure have resurfaced via a new HBO documentary, “John McCain: For Whom the Bell Tolls,” and his new memoir, “The Restless Wave.”

The McCains have a family retreat south of Sedona, Arizona, along tree-lined Oak Creek. Daughter Meghan McCain was married there.

She said on KTAR’s Mac and Gaydos radio show Tuesday that she’s been trying to visit her father every other weekend. She said he’s strong, walking, talking and hanging in there.

“Everybody’s just dealing with it the best they can,” Meghan McCain said.

Following a decorated military career that included spending more than five years in prison camps, McCain entered the political arena in the early 1980s. He went from the House of Representatives to being elected to the Senate in 1986, following Barry Goldwater who retired. McCain gained a reputation as a lawmaker who was willing to stick to his convictions rather than go along with party leaders. It is a streak that draws a mix of respect and ire.