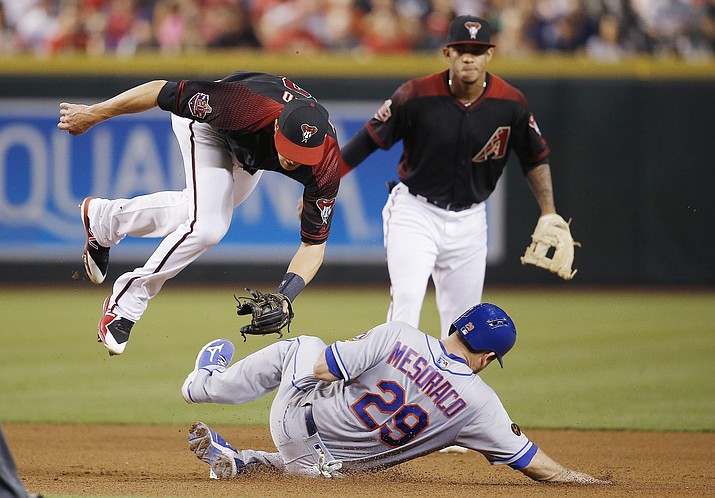 Conforto lined a three-run homer in the second inning, and that was all the support Matz (3-4) needed against one of baseball's hottest teams. Matz allowed a run, six hits and a walk with three strikeouts over 6 2/3 innings.

The Mets ended a four-game losing streak and have won just two of their last 14 games. The Diamondbacks lost for just the second time in nine games.

New York made it 4-0 in the third when Amed Rosario led off with a double and scored on starter Patrick Corbin's wild pitch. The Mets had scored three or fewer runs in 11 straight games.

Corbin got into another jam in the sixth but got some help from center fielder Chris Owings, who threw out Brandon Nimmo trying to score from second base on a shallow single. With two outs in the inning, Conforto doubled into the right-field corner to drive in another run.

The Diamondbacks made it 5-1 in the sixth with Nick Ahmed's double and Paul Goldschmidt's RBI groundout.

Arizona loaded the bases in the seventh against Matz and reliever Robert Gsellman, who rode onto the field in the Diamondbacks' new bullpen cart. Gsellman got Ahmed to ground into an inning-ending fielder's choice.

The Mets' Anthony Swarzak struck out the side in the ninth to end it.

Most of the right field seats at Chase Field on Saturday night were taken up by hundreds of chanting Mets fans in blue shirts representing a group called the Seven Line Army. It bills itself on Twitter as "the largest traveling supporter section in baseball history."

The group went crazy as Conforto's home run sailed into its area, and roared again when Conforto took his position in center field and waved before the start of the bottom of the second.

The fans serenaded Mets pinch hitter Jose Reyes with a soccer-style cheer in the ninth while he was at bat.

Mets: Reliever Jeurys Familia is with the team in Arizona and is eligible to come off the disabled list Sunday. He's been out with a sore right shoulder since June 7. Manager Mickey Callaway said he "wouldn't be afraid" to go to Familia in the eighth or ninth inning right away. ... OF Jay Bruce is expected to be in Sunday's lineup after missing the past three games with a sore back. ... RHP Noah Syndergaard (right index finger) is moving closer to starting a throwing program.

Diamondbacks: RHP Shelby Miller (Tommy John surgery rehab) made a strong start for Class A Visalia on Saturday night, allowing three hits in 6 2/3 innings with 10 strikeouts. ... LHP Robbie Ray (oblique) will throw up to 70 pitches Tuesday for Triple-A Reno. ... RHP Randall Delgado (oblique) is set for one inning of work for Reno on Sunday.

Mets: RHP Zack Wheeler (2-5) is set for his fourth career start at Chase Field. He has 1.93 ERA in three previous starts.

Diamondbacks: RHP Clay Buchholz (1-1) faces the Mets. He has allowed two runs or fewer in four of his five starts this season.