Yavapai County, state brace for monsoon season
What to look for; how to prepare for summer rains 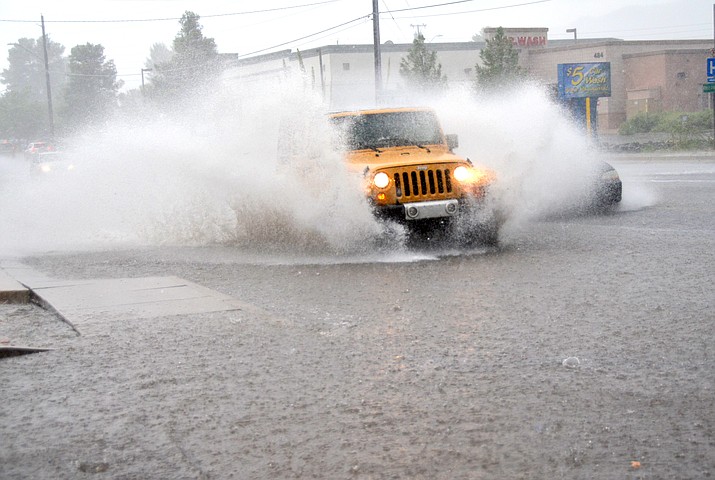 The monsoons are the most dangerous time of the year for weather in the Southwest, the National Weather Service said. Monsoon season can also make for dangerous driving conditions. The Arizona Department of Transportation advises drivers to inspect their vehicles before driving and avoid sudden breaking on wet pavement. (Courtesy)

Mid-June marks the beginning of the monsoons in Arizona. While many Yavapai County residents may welcome the relief of some rain after an especially dry spring, local and state officials are bracing for the intense downpours and poor visibility that inevitably come with summer monsoons.

Monsoon Awareness Week began Sunday, June 10. The National Weather Service (NWS) in Flagstaff has been hosting Google Hangouts, as well as sharing posts on their social media pages to inform the public on safety tips as well as the implications of monsoon season.

According to the NWS, monsoon season is the most dangerous time of year for weather in the southwest.

“Monsoon thunderstorms can cause damaging winds, torrential rainfall, frequent lightning, and dust storms,” according to the NWS website.

Monsoon comes from the Arabic word “mausun,” which means seasons, according to the NWS. For centuries, it was noted by traders along the Arabian and Indian coasts that the dry northeast winds in the winter would suddenly reverse direction in the summertime.

A similar phenomenon occurs in the American Southwest. Most of the year, low-level winds in the region blow from land toward the sea.

By late spring, however, solar heating causes temperatures to skyrocket and surface air pressure to fall. This forms an area of low pressure known as thermal low. Eventually, the pressure difference increases until the cooler and more humid air over the ocean is drawn to the hot, dry air on land. This occurrence eventually develops into thunderstorms.

For some areas, 50 percent of the annual rainfall occurs during the monsoon season.

According to NWS, dust storms or “haboobs” occur as a result of outflow winds from thunderstorms.

The term haboob also has Arabic origins and means “blasting” or “drifting.”

The dust from outflow winds can drastically reduce visibility, according to NWS. They can arrive suddenly and form a wall of dust, making driving conditions especially hazardous.

According to a 2016 National Oceanic and Atmospheric Administration report, while only lasting a few minutes, haboobs rank No. 1 in weather-related cause for injuries in Arizona.

Ron Sauntman, Yavapai County’s emergency services manager, said this is the first concern that comes to his mind for the county when he thinks of the rainy season.

“We always consider factors that are associated with flash flooding,” Sauntman said. “That specifically pertains to areas where we had previous burn scars.”

The Goodwin Fire burn scar is a prime example.

“[The scar] will impact the areas of Mayer and the lower portions of Cordes Junction,” Sauntman said. “It’s all runoff that comes from Big Bug Mesa and Hackberry.”

Worsening the situation, the soil is especially hydrophobic at this time given how dry it’s been.

“Thus, when rain falls, the soil does not readily absorb,” he said. “Therefore, the idea of flash flooding, debris issues, anything that’s going to be associated with that — the life safety concerns — it increases exponentially until the ground can get to a place where it can absorb water.”

Among the many monsoon season safety tips it lists on its website, NWS advises drivers to never drive into a flooded roadway.

“It only takes about 1 to 2 feet of water to float most vehicles, including SUVs,” according to the NWS website.

Lightning can strike 60 miles away from the nearest rainfall, according to NWS. Parts of Yavapai County have already experience a good number of lightning strikes despite how little rain has come with those strikes. In addition to possibly starting fires, there is always the chance of electrocution. To mitigate this risk during a thunderstorm, the safest areas to hide include sturdy buildings and hard-topped vehicles.

Gov. Doug Ducey came out with a statement last week on the importance of preparedness with the upcoming weather conditions.

“With the approach of the summer monsoon season in Arizona, being prepared is key,” Ducey said. “There are simple steps every Arizona driver and passenger should follow, including always wearing your seat belt. Our Department of Public Safety (DPS) provides important guidance for traveling during dangerous weather conditions.”

DPS advises those caught in a monsoon to reduce speed to help reduce hydroplaning. The Arizona Department of Transportation also advises drivers to inspect their vehicle before driving and to avoid sudden braking on wet pavement.