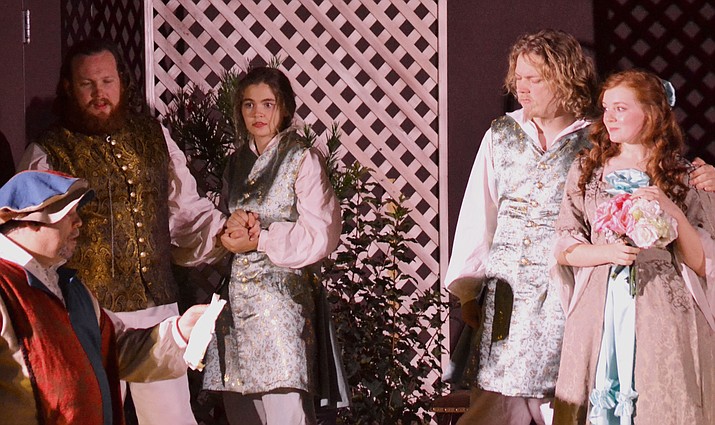 In a dress rehearsal Thursday, June 14, 2018, at the Highland’s Center for Natural History's outdoor amphitheater, in Prescott, Ron Hammer, at left, reads a letter in character as Feste the jester while Ian Burkitt plays Orsino, Kaya Buccigross plays Viola, Duncan Burkitt plays Sebastian and Kylie Sullivan plays Olivia as they prepare for the 5th Annual Shakespeare in the Pine's benefit, which this year features "Twelfth Night." (K. Burkitt/Courtesy Laark Productions)

The Highlands Center for Natural History is featuring two weekends of Shakespeare with Laark Productions putting on “Twelfth Night” for this year’s Shakespeare in the Pines.

Laark Productions always pick what plays they think will work best in the space at the Highlands Center, said Marketing Coordinator Tom Agostino.

“They always try to pick something that has an element that lends itself to being outdoors,” Agostino said. “This particular play, it starts with a shipwreck.”

The shipwrecked people start the play by climbing over a wall into what is the reception area and the first act of the play happens there, he said. The viewers will have the chance to eat and drink as the play happens around them, Agostino said.

Additionally, another reason Laark Productions is going with “Twelfth Night” is because when you’re outdoors, the idea is to stick with comedies and lighter fare, he said.

Performances are Fridays and Saturdays, June 15-16 and 22-23, and they’ll go on rain or shine, Agostino said. Tickets are $60 and available at www.highlandscenter.org. The Saturday, June 16 performance is sold out. The reception is at 6 p.m. and the performance is at 7 p.m. and admission includes appetizers by El Gato Azul, local beer, wine, coffee and dessert.

The event is a fundraiser for the Highlands Center for Natural History and in terms of the amount of money it raises, it’s second behind the Wander the Wild event, Agostino said. This year is going to be better than last year, he said.

“Last year, we had the weekend and the afternoon tea which was smaller and a different format,” Agostino said. “This year, we decided to have two weekends.”

It’s a joy to be able to work with Laark Productions because they do an incredible job and are good at what they do, he said. It’s not an easy thing to put on Shakespeare or present it the way they do at the Highlands Center, but they do it well, Agostino said.