Landscapers who rely on immigrant laborers anxious over sting 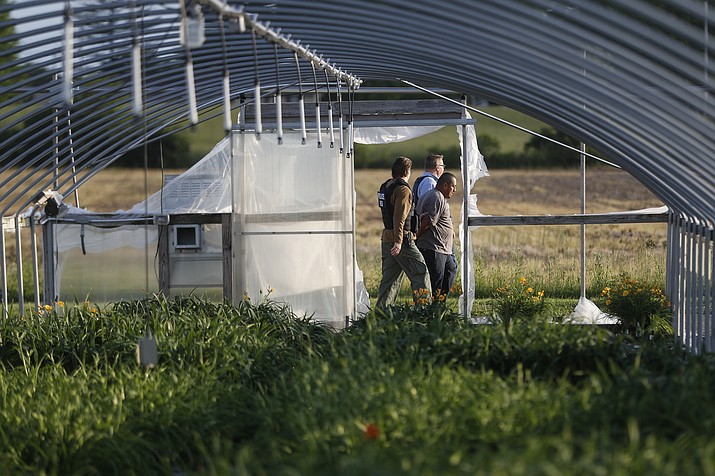 In this June 5, 2018, photo, federal agents take a man suspected of living in the U.S. illegally into custody during an immigration sting at Corso’s Flower and Garden Center in Castalia, Ohio. Facing a severe labor shortage, landscaping businesses that can’t keep up with demand for backyard patios and fire pits worry the immigration raid that rounded up more than 100 people will make it tougher to persuade Congress to allow foreign workers into the United States for seasonal work. (John Minchillo/AP, file)

TOLEDO, Ohio — Already facing a severe labor shortage, landscaping businesses that can’t keep up with booming demand for backyard patios and fire pits worry that an immigration raid that rounded up over 100 people last week will make it even tougher to persuade Congress to allow more foreign workers into America for seasonal jobs.

Owners of landscaping companies near Tuesday’s sting in the Lake Erie resort city of Sandusky and nearby Castalia, which targeted workers with forged documents in one of the largest actions at a workplace in recent years, said it sent a shiver of apprehension through their industry.

“I believe most of us are doing things the right way, but every company is going to be worried that they’re going to be raided,” said Joe Drake, who runs JFD Landscapes in Chardon, also in northern Ohio.

Drake, who has been maintaining lawns for nearly 30 years, spent the past week in Chicago meeting with other seasonal employers to try crafting a strategy that would persuade Congress to ease restrictions on H2-B temporary visas, a type set aside for foreign workers who hold seasonal, nonagricultural jobs.

While many seasonal employers and tourism businesses were shut out of the program this year, landscapers were hit especially hard because they rely on the program more than many other industries to fill jobs they say nobody else wants.

“I’m not condoning breaking the law in any way, shape, or form, but we need a program that works,” Drake said. “How do you think this work is going to get done?”

This year, a federal lottery for the first time determined which employers would get their allotment, initially capped at 66,000 workers until the Department of Homeland Security announced two weeks ago it would allow another 15,000 additional visas.

That still leaves a shortage, though, after the elimination last year of a “returning worker exemption” that allowed workers to come back to their job without counting against the cap.

The number of temporary visas issued each year tends to fluctuate with the economy. And while the limit hasn’t changed since the early 1990s, Congress has at times allowed exemptions to exceed it.

Joe Schill, president of Green Impressions in Sheffield near Cleveland, didn’t get any of the 18 foreign workers he had been counting on this year, forcing him to turn down jobs that cost his business about $300,000 in just April and May.

“I don’t want to hire illegal guys. We’ve got too much to risk,” he said. “But trust me, I can see why guys would want to go that way. I can totally understand these guys who might think they can beat the system.”

U.S. Immigration and Customs Enforcement said that it expects to charge the 114 workers arrested last week at Corso’s Flower & Garden Center with identity theft and tax evasion and that the employer also is under investigation.

Corso’s released a statement Friday saying it demands proper documentation from its employees and ensures they pay taxes. It also said that if anyone used false identification documents to get a job, the company was not aware.

Landscapers in Ohio were quick to point out that the workers were not among those with H2-B visas, who undergo background checks and are legally cleared to work.

Critics of the program say too many employers violate the program’s spirit by filling jobs that aren’t temporary or seasonal in nature, such as landscaping companies in warm weather states.

“So it is easier and sometimes cheaper to hire H2-Bs than it is to find available U.S. workers,” said Jessica Vaughan, director of Policy Studies for the Center for Immigration Studies, which favors reducing immigration.

But Tamar Jacoby, president of business coalition ImmigrationWorks USA, said employers in immigrant-heavy industries have been “crushed for labor as the economy has recovered.”Unlike other industries, landscapers can rely on H2-B visas to some extent, but jobs are still hard to fill. “It’s hot out there, it’s wet, there are mosquitoes, there are brambles,” Jacoby said.

Many landscapers are in a Catch-22 because they can’t find enough domestic labor, said Amy Novak, a Colorado-based immigration attorney specializing in temporary worker visas. “They have no option, really, other than to decrease their business contracts or use undocumented workers, and that is not a good choice,” she said.

Immigration crackdowns could give Congress the impression that employers are trying to take advantage of the system by hiring unauthorized workers, Novak said — or it could help by showing that employers are not able to find the workers they need.