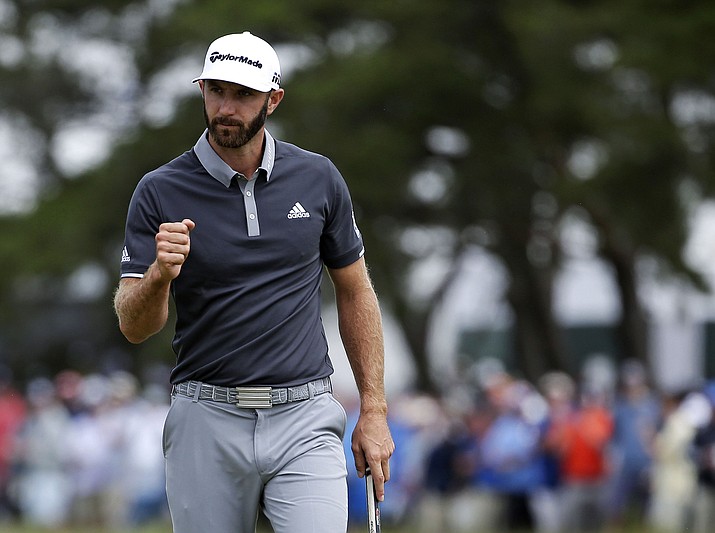 Dustin Johnson reacts after making a putt for birdie on the fourth green during the second round of the U.S. Open Golf Championship, Friday, June 15, 2018, in Southampton, N.Y. (Seth Wenig/AP)

SOUTHAMPTON, N.Y. — Shinnecock Hills is no longer the only challenge at this U.S. Open.

On a course that can cause problems in any weather, where triple bogeys or worse have been recorded on all but six holes, perhaps the most daunting prospect going into the weekend is Dustin Johnson with a four-shot lead.

Johnson played smart on the few occasions he was out of position, holed a 45-foot birdie putt on the par-3 seventh green and endured wind and two hours of rain Friday morning for a 3-under 67.

He was at 4-under 136, the only player still under par going into the weekend. Scott Piercy (71) and Charley Hoffman (69) were at even par.

“You’ve got to play really good golf if you want to shoot a good score, and I like where par is a good score on every hole, no matter what club you’ve got in your hand, what hole it is,” Johnson said.

Even so, there’s plenty of reminders of how it can all go wrong — some of them from Johnson’s own experiences, most of them from the final few hours Friday afternoon in perfect weather from those trying to catch him.

Shinnecock can punish anyone in a New York minute.

“There’s a disaster on every single hole,” Ian Poulter said moments after he went through one.

Poulter was one shot out of the lead and in the middle of the fairway with two holes to go when one bad shot led to a few more that were just as worse — a bunker shot that sailed over the green, a chunked chip into the hay, a chop short of the green and a triple bogey on No. 8. He made bogey on his last hole for a 72.

“I felt stupid knifing the first one,” he said. “I felt even more stupid semi-chunking the next one, and I didn’t do much better on the next one, either. So maybe it makes a few people happy out there that, you know, we kind of mess up just as good as everyone else.”

Poulter didn’t lose sight of being in a tie for fourth, five shots out of the lead.

Hoffman was the only other player under par until he missed the 18th fairway and had to chop it down the fairway and make a 5-foot putt to escape with bogey.

“Dustin plays a whole different golf game than I play, so I’m not going to play the guy,” Hoffman said. “I’m just going to keep playing my game. You’re going to try to hit fairways. Because if you don’t hit the fairway, you’re not getting to the green.”

Tiger Woods won’t be around to see how it unfolds, and plenty of star power joined him on the way out of town.

Woods closed with back-to-back birdies to salvage a 72. He still missed the cut in a major for the fifth time in his last eight tries, this time by two shots. Rory McIlroy missed the cut for the third straight year in the U.S. Open, unable to recover from his opening 80. Jason Day opened with a 79 and missed the cut.

Jordan Spieth joined them in the most unlikely fashion. He took three shots to get up the slope and onto the 10th green, making double bogey. He was three shots over the cut line with six holes to play when he ran off four straight birdies to get inside the number — only to three-putt for bogey on the 17th, stub a chip from the collar of a bunker on the 18th and miss the par putt for a 71. He had not missed the cut in a major since the 2014 PGA Championship.

Piercy, a runner-up to Johnson at Oakmont two years ago, had a 71 and will play in the final group with him Saturday. Piercy’s day was not without regrets, especially when he three-putted from 4 feet for bogey on the par-5 16th.

Defending champion Brooks Koepka made six birdies over his last 11 holes for a 66, matching Tommy Fleetwood for the low round of the tournament.

They were at 141, along with Henrik Stenson and Justin Rose, each with a 70, and Poulter.

Koepka and Johnson are close friends, so he should know as well as anyone what will make it hard to catch him.

“This golf course,” Koepka said. “There’s not many birdies. There’s a disaster around every corner. I mean, all it takes is one shot in the fescue, and you could be in there for a while. But you need a good round tomorrow just to give yourself a chance. Anything within three shots of the lead on the back Sunday, anything can happen.”

Rose also was under par until closing with successive bogeys. With 36 holes to play, he wasn’t overly concerned about tracking down the No. 1 player in the world.

“You just saw what happened to Ian Poulter five minutes ago. That could happen to DJ,” Rose said. “I’m not saying it’s going to, but it could. That’s the nature of the U.S. Open. So hang around is often the best form of attack.”

Johnson knows that all too well.

He had a three-shot lead at Pebble Beach in the 2010 U.S. Open and lost it all on the second hole with a triple bogey, and then compounded mistakes by trying to drive the green on the next two holes. He shot 82. He has endured more than his share of bad luck, bad breaks and bad shots in the majors.

His outlook at Shinnecock Hills has been built on patience and being practical.

“I never want to make doubles,” Johnson said. “Around here, it seems like when I do get out of position, I’m just trying to do everything I can to get it back into position, not try to push it, and just give myself a decent look ... something on the green where I can have a look at par.

“I want to make things as easy as possible, even though they don’t get any easier.”

But this is far from over. Johnson knows that as well as anyone. So does Rose, who overcame an eight-shot deficit against Johnson in the final round in Shanghai last fall at the HSBC Champions.

Johnson shares lead in a US Open that plays like one
Johnson in 4-way tie after day of survival at US Open
Tough course or easy, Brooks Koepka repeats as US Open champ
World No. 1 Dustin Johnson moves atop the RBC Heritage
Piercy sets course record at Silverado, takes lead at Safeway Open