Poll finds most parents and kids agree on Trump, economy 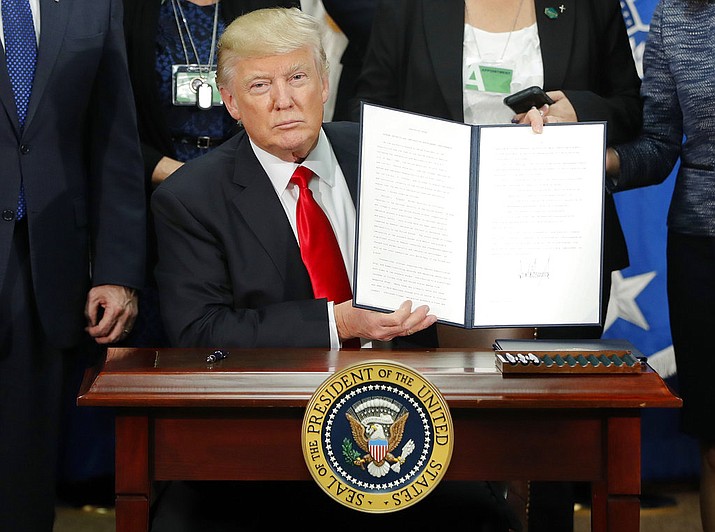 President Donald Trump holds up an executive order for border security and immigration enforcement improvements after signing the order during a visit to the Homeland Security Department headquarters in Washington, on Jan. 25, 2017. A survey conducted by The Associated Press-NORC Center for Public Affairs Research and MTV finds that parents and their kids agree about a lot of things when it comes to politics. Most in both generations disapprove of Trump, and 55 percent say they usually see eye to eye about politics. (AP Photo/Pablo Martinez Monsivais, File) 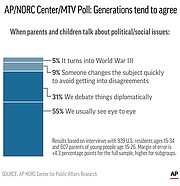 WASHINGTON (AP) — In some ways, President Donald Trump has brought Tammy Kennedy and her daughter, Sue Ann, together on politics.

They don't agree on every issue— Tammy supports abortion rights, for example, while Sue Ann opposes them. Even so, the two agree on most issues and disapprove of the way Trump is doing his job.

"I think we've talked about him in terms of immigration," said Tammy, 51, of Trump's crackdown on illegal immigration that has resulted in the separation of some parents and children at the borders. "I can't imagine my child being ripped away from me."

The common ground doesn't end there. The generations also agree that politics have become dysfunctional, and both say they're dissatisfied with the two-party system.

And most say they agree with each other on a wide variety of individual issues, including feelings on the economy, health care, immigration, racism and abortion.

Still, hotheadedness abounds over politics, as anyone who has access to the internet knows. The survey showed that online, especially, politics seeps into interactions with extended family members. Twenty percent of young people and their parents say they have done the virtual equivalent of uninviting a family member — by blocking them or unfriending them — because of a disagreement over politics. An equal percentage of both generations say they have been blocked or unfriended.

Mackenzi Curtis, 22, said she stopped following one older family member, who's in his 60s, on Facebook over his posts about the students of Marjory Stoneman Douglas High School in Parkland, Florida. Several students became gun control advocates after a gunman killed 17 people on Feb. 14.

"I was thinking they're pretty much bullying a teenager that's been through a traumatic experience," Curtis, a mother of two in Cedar Rapids, Iowa, said. "I think it has a lot to do with the difference in generations."

Eleven percent of respondents say they have had a holiday gathering ruined over politics, while about an equal percentage say they've decided not to attend a family event for the same reason. Seventeen percent say political disagreements inspired a relative to skip a family event.

The two generations are equally likely to engage on social media on the Nov. 6 elections, the study found. A quarter of parents and young people say they'll post or comment on the midterms, and similar percentages say they share memes about the races. That's a key data point for the campaigns trying to rev up and drive voters to the polls.

By any measure, Trump revolutionized Twitter as a political instrument before his 2016 upset over Democrat Hillary Clinton and during his presidency. Ahead of the 2018 midterms, both parties are leveraging the power of social media, engagement and relationships as Republicans defend their congressional majorities and Democrats try to topple them.

Among parents and young people who say they aren't of the same mind, young people say they tend to disagree with their parents most about racism, while their parents say the largest area of disagreement is gun control. Both generations tend to point to Trump and LGBT rights as sources of contention.

The generations say it can be hard to sway the other generation when differences exist, but not necessarily impossible.

Larry Kapenstein, a 64-year-old retired postal worker in Middletown, Pennsylvania, said Trump most recently displeased his family by disinviting the Philadelphia Eagles — this year's Super Bowl champions — to the White House. But while they agree on Trump, Kapenstein said one of his children can be hard to convince on taxes. He's coming to terms with where chunks of his paycheck go. And that can lead to the question of who's to blame for that.

Hint: Voters and the politicians they elect.

"He just doesn't understand why we have to pay taxes," Kapenstein said. "He's just getting into the working world, but he just doesn't get it."

The Youth Political Pulse poll was conducted April 23 to May 9 by the AP-NORC Center and MTV. The poll was conducted using NORC's probability-based AmeriSpeak panel, which is designed to be representative of the U.S. population. It includes 558 young people ages 15-26, and 607 parents in the same age group. The margin of sampling error for all young people is plus or minus 5.6 percentage points, and for parents is plus or minus 6.7 percentage points.