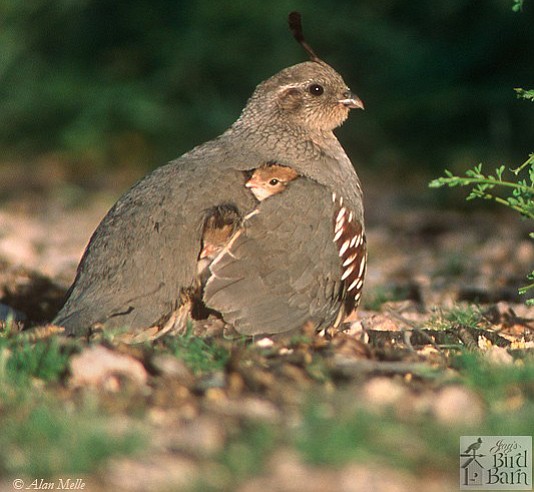 A female Gambel’s quail with chicks is a common sight in this area this time of year. (Alan Melle/Courtesy)

This time of year, a topic frequently discussed at the Bird Barn is wild bird nesting behavior. Particularly, how long it will take for eggs to hatch and how much time it will take for the baby birds to leave the nest.

These questions come up, because wild birds occasionally choose places to nest that are inconvenient for homeowners and they want to know when the birds will be ‘done’. It is important to remember, however, that breeding and rearing young is not necessarily a one-time event each year.

For many songbird species, rearing young is spread out over several months and may include multiple clutches. Some species, such as mourning doves, start breeding as early as February or March and may not be done until September. Today’s column will explore the difference in nesting behavior between two different species.

House finches lay between two to six eggs (my experience is four eggs is fairly common,) and it takes twelve to fourteen days for the eggs to hatch. The fledging period is variable, and ranges between as little as eleven and as many as nineteen days for the young to leave the nest. It is not uncommon for house finches to have up to three broods in a nesting season.

When they hatch, baby house finches are basically naked, their eyes are still closed, and they are totally dependent upon their parents for food and temperature regulation.

It is a common practice for one of the adults to sit on the nest after the babies have emerged from their eggs in order to provide a fairly constant temperature for the babies until they have grown sufficient feathers to insulate and provide them warmth and protection.

For house finches the amount of development occurring in the egg is limited, whereas a lot of development occurs in a very short period of time from hatching until they take flight. It is remarkable to consider a baby bird can go from being featherless to flight in just a matter of two weeks!

My second example is Gambel’s quail. Females lay their clutch of eggs (10-18) over a period of two weeks or more, typically laying one egg per day until she has produced all of the eggs in that clutch. Incubation is postponed until she has finished laying all of the eggs—so the eggs laid from day one forward just sit dormant until she begins sitting on the nest.

The incubation period for quail eggs is anywhere from twenty-one to twenty-four days. When the babies hatch out of their eggs, their development is referred to as precocial. The babies are fully covered with a coat of downy feathers, their eyes are open, and they are ambulatory. Within a few hours they are capable of feeding themselves and following their parents around as they forage for food.

For quail, the longer incubation period means more development occurs inside the egg and their continued development after hatching is a longer, slower process. It will take several months before a baby quail reaches the size and coloration of an adult quail, compared to a house finch that will be the size of an adult in about a month’s time.

On a side note, the ravens nesting in our yard are still busily tending to their young. I can’t see into the nest so I don’t know how many babies there are, but the parents are coming and going throughout the day bringing food to their brood. Based on how noisy the fledglings are, I suspect they will be leaving the nest in the next week or two.

The marvel of development inside an egg
Quail nesting activity already underway
Birds build nests in the funniest places
Column: Incubation and fledging time periods vary
Be on the lookout for baby quail