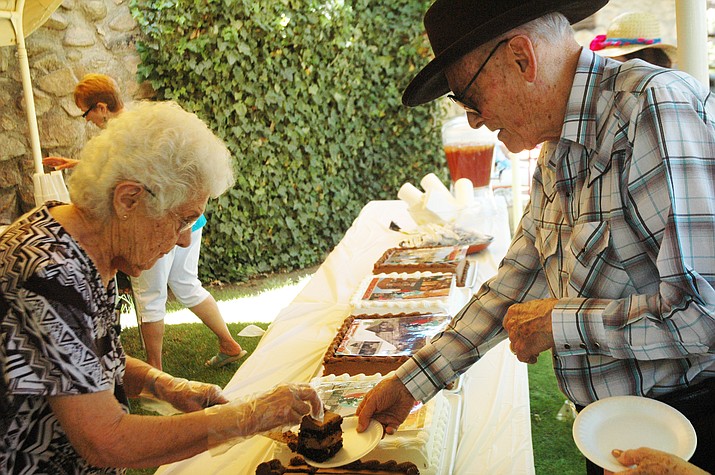 The Sharlot Hall Museum celebrated its 90th birthday Monday, June 11, commemorating when Sharlot Hall opened the museum in the governor’s mansion in 1928.

“Over the course of 90 years that since passed, we have grown to a 4-acre campus with 11 exhibit buildings,” said Executive Director Fred Veil.

“The first one to walk in the door was the then state historian, George Kelly, a position Sharlot had held as the first woman to hold a public office when the Arizona Territory when Arizona was still a territory in 1909.”

By noon, nearly 200 visitors had arrived to celebrate with some arriving even before the museum opened at 10 a.m., he said.

The normal museum admission fee was waived for the day and guests were able to enjoy live entertainment and a kind of miniature festival with living history interpreters, museum docents and staff providing details and histories, said Museum Media and Marketing Manager Ken Leja in a previous story.

Hourly drawings were held for one-year passes, children had the chance to enjoy coloring Willoughby cartoons and watch puppeteering presentations by Dick Morgan. And, visitors had the opportunity to see plans for the new education center and have the opportunity to establish a personalized legacy with a paver project for the new addition.

Museum benefactor Eugene Scott was on hand to celebrate the museum’s birthday.

He was also celebrating his 93rd birthday, Scott said.

Scott’s grandfather was a railroader and is featured in the museum’s depot, Veil said.

Scott’s wife, Jean Scott, was also a major contributor to the depot, he said.