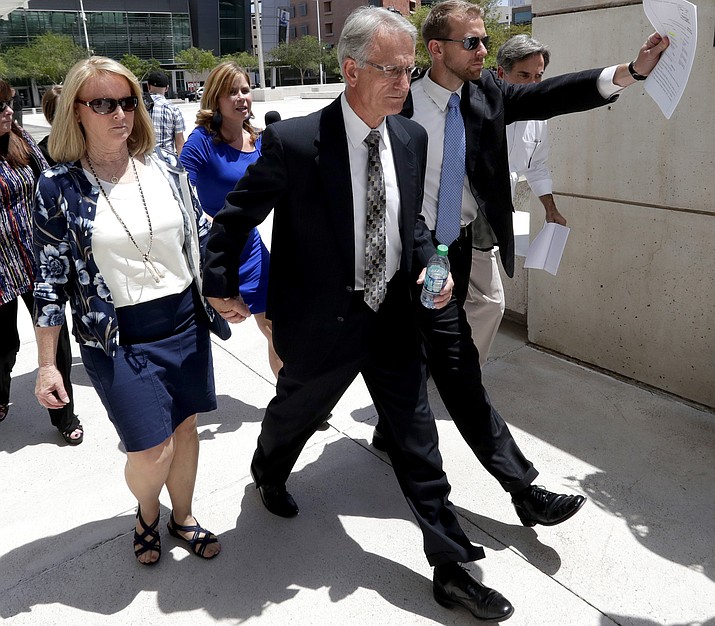 In this June 7, 2017, photo, Former Arizona utility regulator Gary Pierce, center, and his wife Sherry, left, leave Federal Court in Phoenix as their lawyer tries to shied them from cameras after being arraigned on bribery and fraud charges. Pierce who is charged with accepting bribes from a water company owner in exchange for favorable decisions. (Matt York/ AP, file)

PHOENIX — Jurors will get to see what could prove a critical email that prosecutors say should help show that Gary Pierce purposely sought to conceal a land deal at the center of a bribery case.

U.S. District Court Judge John Tuchi has rejected arguments by defense attorneys that an email between Kelly Norton and her then-husband Jim is protected by marital privilege.

His ruling makes it admissible.

What makes the email significant is it originated with Pierce, who at the time was a member of the Arizona Corporation Commission. In that role he voted on several matters involving Johnson Utilities.

Federal prosecutors contend that company owner George Johnson was going to pay for Pierce to buy a 3.5 acre property he wanted in east Mesa for a car dealership. But the plan, according to the government, was to conceal the true buyer.

In a Dec. 29, 2011 email, Pierce tells Jim Norton, who was lobbying for Johnson, he is hoping the bank, which owned the property, would take $300,000 for the property. There is also a “letter of intent’’ to pay that much in cash, a letter signed by both Pierce and Norton.

The email, however, shows Pierce did not want to be on the document.

“I am going to have Rex take my name off this LOI (letter of intent) and you will be the buyer,’’ Pierce writes to Jim Norton.

The “Rex’’ is Rex Griswold, a vice president of a commercial property firm that was handling the offer for the would-be buyers.

That fits into the government’s theory that Johnson was going to be the source of the money — and that Pierce, as a utility regulator voting on matters involving Johnson’s company, sought to hide that information. Defense attorneys have dismissed whatever happened, pointing out the land deal never went through.

Norton, who is an “unindicted co-conspirator’’ in the case has been granted immunity for her testimony on behalf of the government.

Defense lawyers will seek to undermine her testimony last week about her role in the alleged bribery scheme, including how she said she funneled $31,500 from Johnson to Sherry Pierce and, by extension, her regulator husband.

And they already have questioned Kelly Norton’s her credibility and whether she has motive to lie because, as she testified, she discovered her husband was having an affair — and it was not his first.

Prosecutors have known about the email from Gary Pierce asking that his name not be on any documents on the land deal for years.

But it has taken until now to get Tuchi to let them use it.

What has delayed a ruling on the issue is that Pierce sent the email not directly to Jim Norton but to Kelly. She forwarded it to Jim five days later.

That, according to defense attorneys, made the letter a privileged communication between husband and wife.

The judge did not explain his reason for rejecting that claim. But in their arguments to Tuchi, prosecutors said there were two flaws in the defense argument.

One, they noted, is that there is nothing in the email intended to be a communication between Kelly and Jim.

On top of that, Knapp said that the marital privilege “does not apply to communications having to do with present or future crimes in which both spouses are participants.’’

And Kelly Norton as an “unindicted co-conspirator’’ for her role in the whole bribery scheme, was a participant.

The indictment charges that the proposed land deal and money that Johnson allegedly funneled through Kelly Norton to the Pierces was a bribe for Gary Pierce to promote and vote in favor of two issues before the commission that the utility owner wanted.

One allowed him to pass on the cost of his personal income taxes to utility ratepayers.

The other increased the book value of the water and wastewater company, translating into higher charges for customers.