Ducey opposed to Arizona ratifying Equal Rights Amendment
Since Illinois' lawmakers voted last month to ratify the amendment, only one more state is needed for the Amendment to be included in the U.S. Constitution 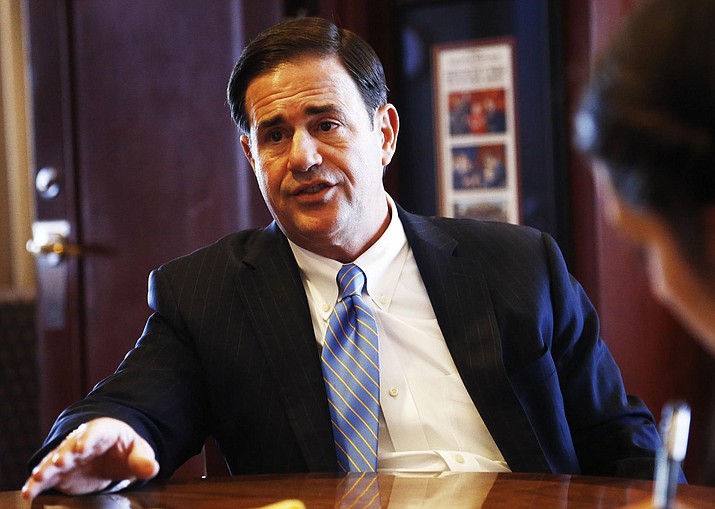 In this file photo Republican Gov. Doug Ducey speaks about a variety of issues during an interview in his office at the Arizona Capitol Tuesday, May 8, 2018, in Phoenix. (AP Photo/Ross D. Franklin)

PHOENIX — Gov. Doug Ducey is not in favor of Arizona becoming the state that finally puts the Equal Rights Amendment into the U.S. Constitution.

Ducey said Monday that as far as he’s concerned Arizona already is “a land of opportunity’’ for all. And that, he said, includes women.

“I don’t know that that’s something that’s necessary for our state to be involved in at this time,’’ the governor said.

And Ducey brushed aside the fact that if Arizona were to become the 38th state to ratify the ERA and it became the law of the land, it could make a difference, not just here but in other states where the opportunities for women might not be the same as he says exists here.

“I’m going to stay focused on the state of Arizona and moving Arizona forward and making sure it stays the place of opportunity that it is today,’’ Ducey said in dismissing the issue. “Next question.’’

Technically speaking, Ducey has no say: Ratification is subject only to state House and Senate approval.

The governor, however, has the constitutional ability to call lawmakers into special session and get them to laser focus on an issue of his choosing. Ducey, however, has no such plans.

But it’s not like Ducey is alone in his opposition. GOP leaders have used procedural maneuvers in each of the last two years to block the issue from ever getting to the House floor.

What has made the issue immediately relevant is that Illinois lawmakers voted late last month to ratify the amendment. That means action by just one more state is needed to put it into the U.S. Constitution.

The text of the amendment is simple: Equality of rights under the law shall not be denied or abridged by the United States or any state on account of sex. It also would empower Congress to enact laws to enforce the provision.

At the time Congress gave its approval in 1972, there were multiple questions about whether women were legally entitled to things like equal pay.

But a change in the Constitution requires ratification by three-fourths of the states. And that process stalled after several years amid stiff opposition by conservative groups and particularly Phyllis Schlafly, founder of the Eagle Forum, who argued that such a provision would lead to things like drafting of women.

Ducey questioned whether the ERA is needed.

“I think if you look at the employment numbers, if you look at the number of legislators we have by percentage, the number of governors that we’ve had across the country, the success in income growth across all spectrums inside the economy and our population, you’d see positive trends,’’ the governor said. “And that’s something I’m going to continue to focus on.’’

Part of what has renewed interest is the #MeToo movement. But the push in Arizona for ratification actually began last year.

During floor debate last year, Rep. Pamela Powers Hannley, D-Tucson, complained that her legislation to put Arizona on record in favor of the amendment never even got a hearing. So she made a motion that the measure be brought to the full House for an immediate vote.

But rather than simply allowing a vote, Speaker J.D. Mesnard made a procedural motion to instead have the House recess. That was approved along party lines, denying Democrats the vote they sought — and effectively keeping Republicans from having to go on the record on whether they support or oppose the amendment.

“Do you want to go home and tell your daughters and granddaughters that you preferred to take a recess than actually have the opportunity to be leading and continuing to lead the state of Arizona?’’ complained Rep. Isela Blanc, D-Tempe.

But Rep. Kelly Townsend, R-Mesa, said she would not be pushed into having to make a decision.

“This is an issue I need to study more on,’’ said Townsend, who was 4 years old when the amendment was introduced.

On one hand, Townsend said she no more supports paying someone less because of gender than she would to discriminate based on religion.

“I do have a problem with government telling businesses how to operate,’’ she added.

Mesnard argued that a vote to recess — essentially a vote to table the issue — was not a vote against the Equal Rights Amendment.

Instead, he argued, it should be seen as a vote to block Powers Hannley from bypassing the normal process.

That’s true. That process would have been to have a hearing in the House Committee on Judiciary and Public Safety to which Mesnard had the bill assigned.

But Mesnard did not dispute that he knew that Rep. Eddie Farnsworth, R-Gilbert, who chairs that panel, was unlikely to give it a hearing.

Farnsworth said he’s not against the concept of equal rights.

“I have seven daughters,’’ he said.

But Farnsworth argued that state law already prohibits discrimination based on gender.

That fix, according to Powers Hannley, is that women are still, on average, being paid less than men, even as women are moving into the same kinds of jobs that men traditionally have held.

Farnsworth, however, said the measure may have “unintended consequences,’’ including the possibility that women would be subject to the draft if it is reinstated.

There’s also a legal issue: Even if Arizona lawmakers were to go along there’s the question of whether the action is too late:

The deadline imposed by Congress to approve it was 1982.

But there is a legal argument that Congress, which had sent the measure to the states in 1972, has the power to retroactively extend that deadline.

There is a provision in the Arizona Constitution that bars discrimination or preferential treatment based on race, sex, color, ethnicity or national origin.

But that covers only public employment, public education or public contracting.