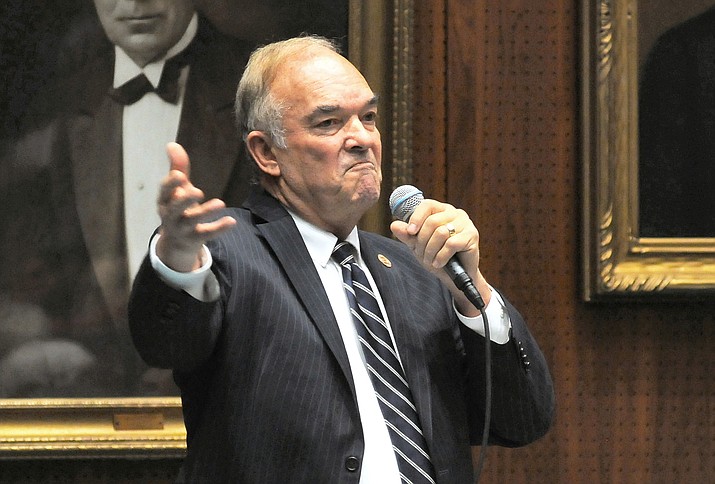 Rep. Don Shooter is pictured in February, 2018, as he told his colleagues in the state House that although he has “done stupid things,” they should allow him to remain a member of the House. They did not agree, voting 56-3 for his expulsion. Now Brent Backus, a Republican contender for state Senate, is trying to short-circuit Shooter's bid for re-election to the Legislature. In legal papers filed in Phoenix Friday, Backus contends that Shooter isn’t legally eligible to run. (Howard Fischer/Capitol Media Services, file)

PHOENIX — A Republican contender for state Senate is trying to short-circuit a bid by ousted Rep. Don Shooter to get back into the Legislature.

Attorney Tim La Sota, who represents Backus, said that’s because Shooter changed his voter registration to a central Phoenix address in April after he was ousted from the House when his colleagues said he was guilty of sexual harassment. And that, said La Sota, means he has not lived in the district he wants to represent for a year before running, something the attorney said is a state constitutional requirement.

A hearing is set for next week in front of Maricopa County Superior Court Judge Rosa Mroz to consider the issue.

Shooter, in a written response to questions, indicated he is not worried about the legal challenge.

“Let’s dance,’’ he said. And Shooter derided Backus, who lives in Waddell, a community on the western edge of the Phoenix metro area — but within the legislative district — for bringing the lawsuit.

“What is he afraid of?’’ Shooter said. “A little competition never hurt anybody.’’

Shooter did not address questions about changing his voter registration.

But even if the lawsuit succeeds and Shooter is knocked off the ballot, that does not guarantee that Backus will be the Republican nominee.

Incumbent Sen. Sine Kerr of Buckeye, appointed earlier this year after Sen. Steve Montenegro resigned to run for Congress, wants a crack at a full two-year term. And Goodyear resident Royce Jenkins also is in the GOP hunt.

Whoever survives the Aug. 28 primary will go on to run against Buckeye Democrat Michelle Harris in the general election.

The sprawling District 13 runs from parts of Yuma up through Wickenburg and into Litchfield Park.

Republicans outnumber Democrats in the district by a margin of close to 2-1. But political independents make up more than a third of the registered voters.

At the heart of the challenge is a provision of the Arizona Constitution, which says that those seeking to be legislators must have been a resident of the state for three years prior to election “and of the county from which he is elected at least one year before his election.’’

That provision, though, dates from territorial days, when legislative seats generally were allocated on a county-by-county basis.

All that changed in the 1960s when a U.S. Supreme Court ruling required districts of roughly equal population. And with 30 districts in the state, that meant some had to cross county lines.

But La Sota is arguing that the effect of this change in how districts are drawn means the constitutional language should be read to mean that candidates must have lived in their districts for at least a year.

“The law on interpretation of the constitution is you give effect to the intent of the framers,’’ he said.

“The intent of the framers was clearly that members of the Legislature be from the area they represent,’’ La Sota continued. “There’s no getting around that.’’

In his nomination papers, Shooter lists his address at 2901 S. Palo Verde Lane, Unit 44 and said he has been a resident of the district for 38 years.

And there’s another legal issue, even if the judge decides that the one-year requirement refers to the district and not the county.

The language says only that the person needs to be a resident for “at least one year before his election.’’ But it does not say “immediately,’’ which could leave open for interpretation whether the prior 38 years is sufficient.