Sharlot Hall Museum and Prescott: A common path to our ‘hometown’ future 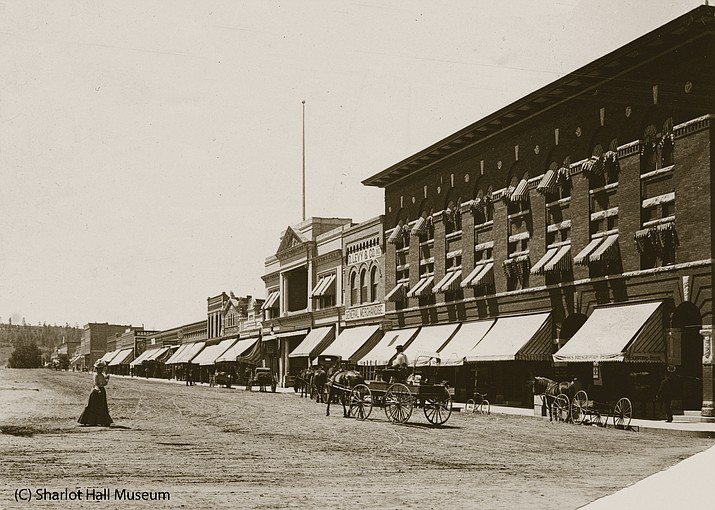 The rebuilt downtown of Prescott in 1903 after the devastating fire of July 1900 that almost wiped out Whiskey Row.

Issued in 1911, revised and enlarged in 1924, “Cactus and Pine” was a “little book of Arizona verse” intended to “go deeper into the life and growth of Arizona than any mere history or mere literature,” according to Sharlot Hall, author. It became one of her most popular compendiums, and was prepared on the old typewriter on display at the Governor’s Mansion of the Museum.

The story of Prescott and that of the Sharlot Hall Museum are entwined by a venerable old log-cabin building, the vision of a woman well ahead of her time, and a community built on a frontier heritage steeped in legend, lore and history.

Discovery of gold in the local hills during Civil War-era 1863 set in motion a chain of events that led to the founding of Prescott on May 30, 1864.

Local folks met at a mercantile log cabin alongside Granite Creek to establish the township. This, in turn, prompted the making of a wilderness capital and creation of a government for the Arizona Territory.

Adventurers, miners, farmers and ranchers, merchants and families came in search of new opportunities and a new life. They created a community with schools, churches and business establishments including, of course, saloons and brothels. Eventually came railroads and such other indicia of 19th century modernization as electricity and public water service. To be sure, Prescott in its territorial years was a frontier town with its share of crime, rowdyism and occasional gunfights on Whiskey Row. Over time, it matured and developed into a commercial center for the Central Highlands.

Prescott ultimately lost its status as Territorial Capital in 1889, but continues to serve as the center of government for Yavapai County. Mining, ranching and railroading no longer drive the area’s economy, having been replaced by government and tourism.

While its history as a western frontier town is a thing of the past, that Past — nevertheless — is preserved today for future generations in the exhibits, collections and archival records of the Sharlot Hall Museum.

As a young teenage girl in the 1880s, Sharlot Hall was regaled with stories of frontier life by Judge Henry Fleury, who had obtained possession of the old Governor’s Mansion. Hearing those stories passed down from those who had lived it, she vowed to one day create a museum for the for the Mansion and other historic buildings to showcase the frontier life and Territorial days of the wild, wild West.

She began collecting the archival records, collections and artifacts of generations past, and writing about their heritage. She became an activist and advocate for preservation through her writings, and was ultimately named Territorial Historian, the first woman to hold public office, in 1909.

With statehood, the Arizona Legislature secured possession of the old Mansion in 1917 for $7,000. The building lay vacant for many years and the City of Prescott was challenged to maintain the property and building as a significant part of its history and heritage.

Sharlot Hall petitioned the city for a lifetime lease to preserve the log-building, improve the grounds and use her extensive collection of artifacts and historical records to create a museum. She moved into the building in mid-1927.

The “Gubernatorial Mansion Museum” was opened in June 1928. Sharlot and others founded the Historical Society of Prescott to raise money for the restoration of the Mansion, and collect additional artifacts and specimens for exhibition. The organization was converted to an official historical society, and in 1965 the Legislature created a state agency to operate the Sharlot Hall Museum.

For nine decades, the Museum has served as a model of public-private partnership, and as a template for civic tourism.

According to university and state tourism studies, Sharlot Hall Museum remains one of the top attractions in the city, second only to the courthouse plaza and its Whiskey Row. Encompassing four acres, the Museum campus features an array of historic structures, exhibit galleries, a heritage rose garden, herb gardens and other diverse plants and trees that form a genuine arboretum with few equals in the region.

While its mission area is Arizona and its Central Highlands, the Museum remains first and foremost a Prescott “jewel” preserving the history and heritage of this important territorial town.

Included among the historic buildings the Museum preserves and maintains are the 1864 Governor’s Mansion, the oldest existing government building in the state of Arizona; Fort Misery, the oldest surviving log cabin in Arizona and the site where settlers met on May 30, 1864, to found and name the town of Prescott; and nine other exhibit buildings that showcase the development and expansion of Prescott and the surrounding communities.