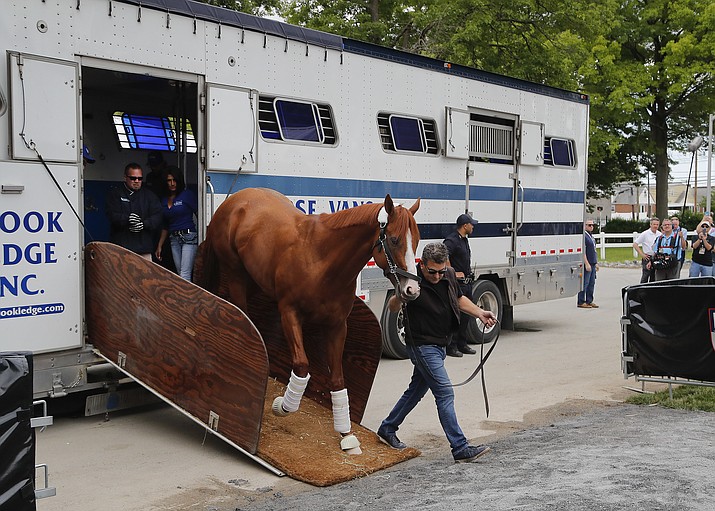 Kentucky Derby and Preakness Stakes winner Justify is led off the trailer upon arriving at Belmont Park, Wednesday, June 6, 2018, in Elmont, N.Y. Justify will attempt to become the 13th Triple Crown winner when he races in the 150th running of the Belmont Stakes horse race on Saturday. (Julie Jacobson/AP)

NEW YORK — Kentucky Derby and Preakness winner Justify arrived in New York on Wednesday ahead of this weekend's Belmont Stakes, in which the colt will try to sweep the Triple Crown.

Justify traveled smoothly to Belmont Park via a flight from Louisville, Kentucky, and a van ride from an airport on Long Island. He was greeted by a throng of media recording every step as he walked into Barn 1, the same place American Pharoah stayed before ending the sport's 37-year drought with a Triple Crown sweep in 2015 and becoming the 12th horse to achieve the feat.

"It's just a different vibe," said Bob Baffert, who also trained Pharoah. "It's like we know it can be done."

Justify will face nine rivals on Saturday in the 1 ½-mile Belmont, the longest and most grueling of the three-race series. He brings a 5-0 career record to the race in which the colt is the morning-line favorite at 4-5 odds.

"Now he has to just close the deal," Baffert said. "It's a lot of pressure, too. You're in New York. The place is going to be rocking. You want to see superstars."

Justify was greeted with squeals from horses already in the barn of trainer John Terranova, who hosts Baffert's out-of-town runners.

"He got their attention somehow. He must give off something," Baffert said. "When he got off the van, he was just dragging me around there."

Baffert was the victim of a bite on his hand from Justify the other day while walking the horse.

"He's a tough horse," the trainer said. "For about four seconds, you can love on him, but that's it."

Justify will step onto Belmont Park's deep, sandy surface for the first time on Thursday. Baffert had yet to decide exactly what the colt will do the next two days, although it won't be anything of consequence; his major training has been completed.

Justify won the Derby and Preakness on sloppy tracks.

Baffert's 13-year-old son, Bode, already texted his race-day forecast to his father, who read it out loud off his phone. Bode wants to be a meteorologist.

"Tell dad that we are having half an inch of rain on Belmont day. Cold front pushing through Elmont day of race. Showers and thunderstorms likely, with isolated downpours at times," Baffert said, chuckling. "That's my weatherman. He's always right."

Some of Justify's rivals have already tested the track after arriving earlier in the week.

Hofburg, the early 9-2 second choice, galloped on Wednesday and visited the paddock where he will be saddled on race day. Bravazo, the Preakness runner-up, also galloped.

Justify and Bravazo are the only horses that will compete in the Derby, Preakness and Belmont. Justify's half-length victory in the Preakness allowed Baffert to tie D. Wayne Lukas with his 14th victory in a Triple Crown race, the most by any trainer.

Now, Bravazo and Lukas will try to upend history.

"I think it'll get down to which horses have the pedigree and the stamina to finish," Lukas said.

That won't be known until Saturday because none of the horses has ever run 1 ½ miles in a race, and likely won't be asked to again in their careers.

"We've seen so many good horses come in here and get beat," Baffert said. "Is he good enough? He's good enough, but he needs to run his race. He's going to be a target now and you don't know what's going to happen."