Drones used to survey 160 acres in the Dells 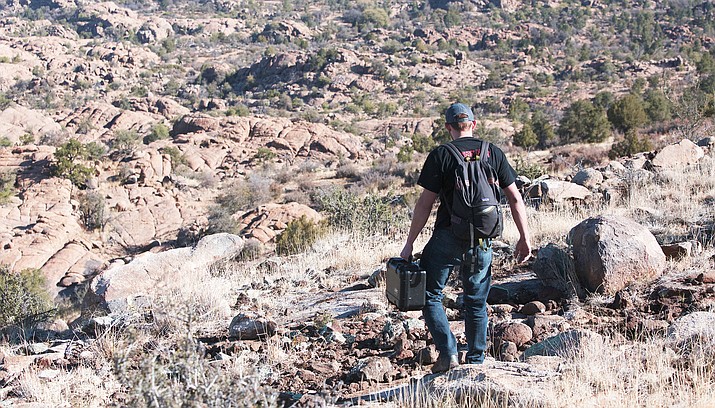 While the development of unmanned aircrafts — more commonly known as “drones” — started in the early 20th century, many people fail to realize the variety of jobs a drone can do.

One of the latest drone uses here in Prescott is a collaboration between the City of Prescott Trails Department and Yavapai College’s UAS (Unmanned Aircraft Systems) program.

As many are aware, the City of Prescott recently purchased 160 acres of the Granite Dells.

With the intention to preserve the virtually untouched land, the Trails Department plans to build 6.26 miles of publicly accessible hiking trails for both on-foot hikers and mountain bikers.

“Building hiking trails is just as much artistic as it is scientific,” states Chris Hosking, head of the Trails Department.

Hosking has been working with the head of Yavapai College’s UAS program, Matt Mintzmyer, to assess the Storm Ranch North property, map it out, and determine the best approach to trail construction.

Using a web-based program called Drone Deploy, White plots on a map where he wants the drone to fly, and the computer generates rows for the drone to fly along. Once everything is programmed, the entire process is automated.

“Ultimately what the drone is doing is stitching together multiple pictures into one giant one,” states White.

To put this into perspective, White says that roughly 1,700 photos were taken during the 160-acre survey.

The 3D mapping technology being used in conjunction with the Mavic Pro has the capacity to capture such high-resolution images that even the vents on the sides of buildings can be seen.

Such fine detail allows for a far greater quality image, and thus an extremely accurate account of the land being surveyed.

“If you’ve ever been on Google Maps and start zooming in, eventually it will just blur. But we go past that. With our footage, you can actually see rocks, trees, cars,” explains White.

Not only do drones allow for extreme accuracy, but the savings in time and cost is unmatched.

“Drone surveying allows surveys to become an individual task. One person goes out and operates the drone by themselves, as opposed to traditionally you take a crew of 3 to 4 people — and it can take months. But with a drone I can get 200 acres surveyed in four to five hours, and I’ll have a survey that will be more accurate than traditional methods,” concludes White.

While the survey itself is being used to aid in the construction of trails — assessing elevation levels, shrubbery, etc. — the UAS program will also be constructing a model of the entire trail layout using 3D printing technology.

This model will be used to present the new “Mile High Trail System” to the public, and will be placed at the trail head for hikers and bikers to visualize their course and distinguish between different trails.

Once the trails are complete, Hosking hopes to use drones to record video of the different trails and then create a virtual online experience for the public.

“The most impressive thing to me is taking people in there who haven’t been, or can’t go,” states Hosking.