State of the bike
Prescott’s become more bike-friendly over the past few years, say cyclists, but still has a way to go 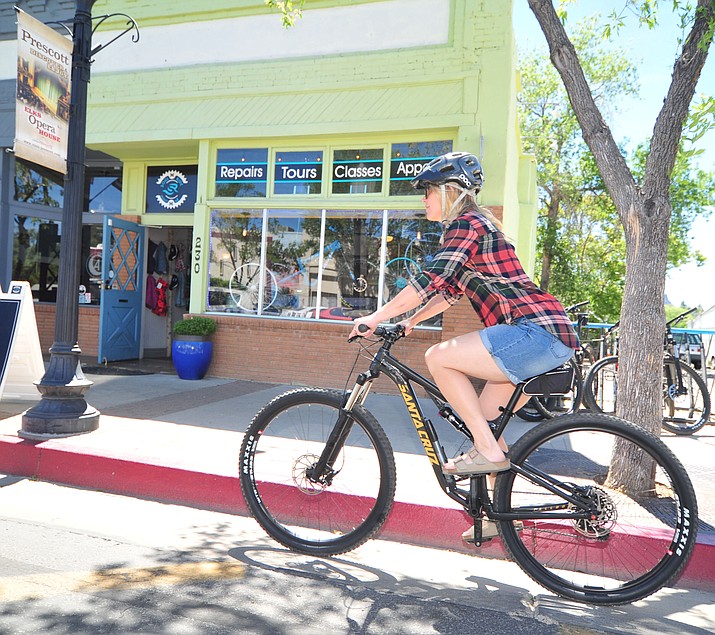 With mild weather, which makes commuting by bicycle practical, and a well-developed system of trails, Prescott seems to be a pretty bike-friendly city.

Cina McConaughy, co-owner at Soul Ride, a mountain bike shop, said the trails are good for recreation, but the city streets aren’t quite there yet,

“I just don’t think they have enough bike lanes,” she said, adding that a better system for commuters would be helpful.

“The off-road trail system is very friendly,” but “it’s not the safest place to road bike.”

Todd Sadow of EPIC Rides, which puts on the annual Whiskey Off-Road biking event, said, “I believe the Whiskey Off-Road has contributed in a positive way to Prescott’s bike-friendliness. It’s created goodwill, and it’s raised funds for both Prescott Alternative Transportation and (Prescott Mountain Bike Alliance) to help further their missions in the community while improving bike infrastructure and trail accessibility.

“Notably, it also helps to put bikes in front of the community in a very prevalent and positive light each year to help people less familiar with cycling gain comfort with who cyclists are and how we co-exist with non-cyclists while contributing to the same enjoyable quality of life,” he said.

Cindy Alward, co-owner at High Gear Bike Shop said, “I believe there’s always room for improvement, I feel that we’ve come a long way since I first moved to Prescott (30 years ago).

That makes the bike lanes unsafe for cyclists, she said, and then the cyclists end up riding back toward the traffic lanes.

“When the roadways are clean, I’m able to stay as far to the right as possible,” she said, but when she has to ride closer to the traffic, drivers who can’t see why she’s not using the bike lane become frustrated.

Prescott’s Street Maintenance Superintendent Bobbie King said she was not aware of the problem, but “White Spar Road is City of Prescott’s responsibility up to Copper Basin Road. The road south of that point is maintained by the Arizona Department of Transportation. I will relay the complaint to the local ADOT road maintenance supervisor, and we will ensure we get the bike lanes swept on our portion of White Spar Road.”

“We’ve come a long way, but we have just as far to go,” Alward said.

As reported in the Courier in January 2018, over the past four years, nearly 200 pedestrians and cyclists have been hit by a vehicle on the streets of Prescott. In fact, on an average of every other week or so since 2013, a vehicle-versus-pedestrian collision has occurred.

Bicycle/vehicle collisions happened less frequently, but still on an average of more than once a month.

In 2015, there was a concerted effort to improve safety for bicyclists, with work by an ad hoc committee and the Prescott Police Department.

The concept of designating bicycle lanes also has been a matter of discussion — and debate — among City Council members in 2015 and before that.

Part of the concern stems from at least one bicycle-versus-vehicle crash and subsequent suit that occurred more than two decades ago. That preceded city efforts to add bike lanes in several areas and, for example, widen some roads.

There also have been serious bike-versus-vehicle crashes more recently, including three — one each in 2013, 2014 and 2015.