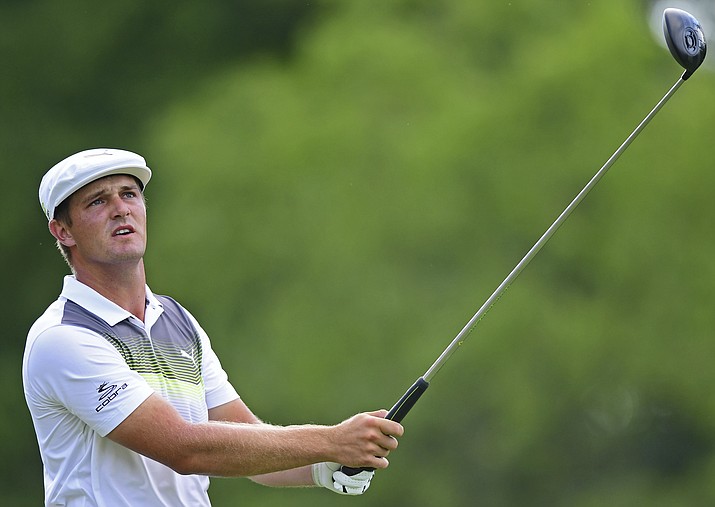 Bryson DeChambeau follows his tee shot on the 18th hole during the third round of the Memorial golf tournament Saturday, June 2, 2018, in Dublin, Ohio. (AP Photo/David Dermer)

DUBLIN, Ohio — The cheers kept coming across Muirfield Village, even after Tiger Woods was done making another run up the leaderboard at the Memorial.

Patrick Cantlay made two eagles, including a hole-in-one.

Joaquin Niemann, the 19-year-old from Chile, took the lead with a 50-foot eagle putt and fell out of the lead when his bid for another eagle attempt landed in a tiny corner of a meandering creek.

Bryson DeChambeau ended an action-packed Saturday by making one of only six birdies on the par-3 16th hole, saving par with a tough flop shot from behind the 17th green and finishing off a 6-under 66 with a 9-iron into 5 feet.

That gave him a one-shot lead going into the final round, which features Woods in the mix at Muirfield Village for the first time in six years.

“Look, I just want to birdie every hole,” DeChambeau said. “That’s all we’re trying to out there.”

The course is so soft and vulnerable, it seems as though that’s what it might take.

Woods certainly appears up to the task. He hit the ball so pure on Friday that he missed five putts inside 7 feet and still shot 67.

He had just as much control on Saturday and at one point was tied for the lead. And then he three-putted two of the last three holes, missing a par putt just over 3 feet on the 18th, and all he had to show for it was a 68.

“I know I shot 68 today, but again, that’s probably the highest score I could have possibly shot,” said Woods, who was five shots behind.

“I played really, really well. I played beautifully, actually. Had total control of what I was doing out there and just didn’t finish it off.”

Woods is a five-time winner at the Memorial, the last one in 2012.

He has gone nearly five years since his last victory.

This is the third time this year Woods has gone into the final round within five shots of the lead.

Still steaming from his last putt, he was asked if his game was good enough to win.

The math favored physics-minded DeChambeau going into Sunday, but not by much.

He was at 14-under 202, and even DeChambeau couldn’t help but look back at two short birdies that got away.

“Just keep thinking about those two 3-footers I missed,” said DeChambeau, who was at 14-under 202. “I played great, obviously. Ecstatic about where I am.”

DeChambeau wasn’t even sure where he was when he finished because so many players worked their way up and down the leaderboard over the final two hours. He wound up with a one-shot lead over Kyle Stanley, who bogeyed the 18th hole from the bunker for a 70; Cantlay, who drove into the creek left of the 18th fairway for a bogey and a 66; and Niemann, who atoned for one big mistake on the 15th hole with a birdie on the 18th for a 70.

Six players had at least a share of the lead at some point.

Woods played the last five holes of the front nine in 5 under, starting with his second eagle of the week. And then he stalled, just like he did on Friday. He didn’t make another birdie until the par-5 15th, when his sharp-breaking 15-footer dropped to give him a tie for the lead.

That didn’t last long. Woods ran his 45-foot birdie putt about 7 feet by on the par-3 16th and missed it coming back, and then closed by missing a 3-foot par putt.

More thunderstorms were expected Sunday. The final round will be threesomes teeing off earlier than usual to account for the forecast.

“The weather is going to be a little iffy,” Woods said. “But I’m in a position where if I shoot another good round like I had the last two days, I’ve got a chance.”

Rory McIlroy, remarkably, has reason to feel the same way.

McIlroy nearly missed the cut, surviving on the number after two days. He played bogey-free for a 64 and wound up just six shots behind. Just like Woods and DeChambeau, he had a few regrets on the greens. McIlroy missed three birdie chances inside 8 feet.

Rose has a chance to reach No. 1 in the world with a runner-up finish, depending on what Justin Thomas does Sunday. Thomas shot a 68 with three bogeys and was seven off the lead.

Along with making his second ace of the season, Cantlay blistered a 4-iron as far as he could hit it on the par-5 15th, the ball landing just short of the green and stopping 4 feet away.

Niemann took the lead with his 50-foot eagle. He fell out of a tie for the lead on the 15th when his shot flared out to the right and caught the corner of a creek, leading to bogey.

He still was in good shape to win in just his fifth start on the PGA Tour.

Patrick Cantlay rallies from 4 back to win the Memorial
Moore’s 65 leads by 1 at Memorial as Woods rallies for 70
Chilean teenager puts on good show, shares lead at Memorial
Stenson takes 1-shot lead at Bay Hill; Woods 5 back
Thomas holds on to win BMW Championship