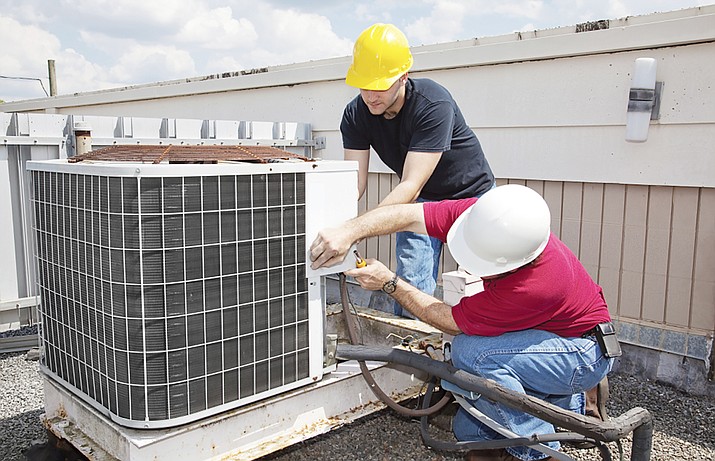 Having central air conditioning units serviced before the start of summer can ensure they run as efficiently as possible when temperatures begin to rise. (Courtesy)

Few people can make it through the dog days of summer without turning on their air conditioners. Men and women concerned about the environment and conserving energy may try to avoid using their air conditioners, but doing so on especially hot days can be challenging and potentially even deadly.

The Centers for Disease Control and Prevention estimates that roughly 600 people die from complications related to extreme heat each year.

Heat stroke can result when a body overheats after prolonged exposure to or physical exertion in high temperatures.

The Mayo Clinic notes that the condition is most common in summer and that a lack of air conditioning during periods of sustained hot weather is a risk for heat stroke.

Conserving energy during summer is a noble pursuit, but people should not jeopardize their health in an effort to conserve energy.

Air conditioners might not be the most eco-friendly appliances, but there are ways to run them without wasting energy.

• Use a window unit or zoned system overnight. The U.S. Department of Energy notes that central air conditioners are more efficient than room air conditioners, which are typically installed in windows.

Zoned systems come equipped with programmable thermostats that homeowners can adjust when they go to bed, ensuring they won’t be cooling empty living rooms and basements overnight.

• Have units serviced before summer begins. Well-maintained central air conditioners will work more efficiently. Routine maintenance of air conditioning systems will ensure that systems are not working harder, and therefore consuming more energy, than necessary to cool a home.

• Conserve energy in other ways. Because the dangers of heat stroke and heat exhaustion are so considerable, men and women should never keep their air conditioners off on hot days simply to conserve energy.

Finding safer alternatives to conserving energy on hot days can be just as effective and won’t put consumers’ health at risk.

Unplug appliances that are not being used and prepare cold dinners so ovens that can make home interiors feel hotter won’t need to be turned on. In addition, take advantage of the longer daylight hours in summer and keep lights off until the sun goes down.

These are safe ways to conserve energy on hot days.

Air conditioners can keep people safe during summer, and there are ways to use them and still conserve energy.