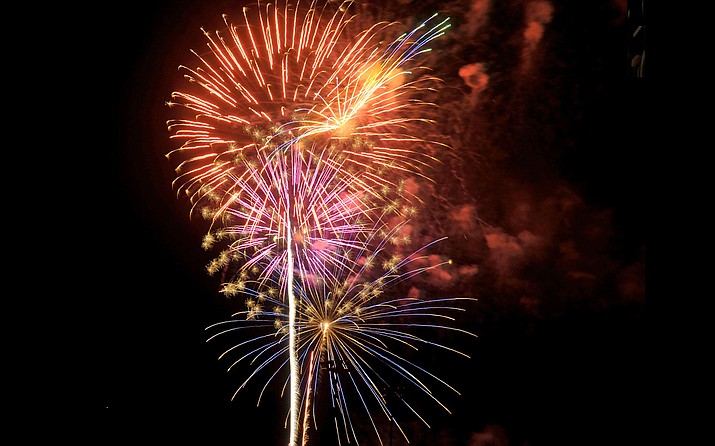 Bright colors rain down from the sky while the Fourth of July fireworks light up the Prescott sky. (Courier file photo)

Fireworks displays that coincide with the peak of wildfire season: It has long been a July 4 dilemma for the City of Prescott.

This year is shaping up to be no different.

While the traditional July 4 fireworks display is slated to be back in downtown Prescott this year after last year’s hiatus, wildfire concerns reportedly could still disrupt those plans.

Local event promoter Steve Gottlieb said this week that he is planning for an evening fireworks show in conjunction with the annual July 4 celebration at the Mile High Middle School football field.

Lots of inflatables — with and without water — for the kids during the Fourth of July festivities on the Prescott Mile High Football field in downtown Prescott. (Les Stukenberg/Courier, file)

The fireworks, which are scheduled to begin after dark on July 4, will be accompanied by patriotic music from the 50-piece 108th Army Concert Band — a first for the local fireworks display, Gottlieb said.

The fireworks display is being planned to launch from two sites — the roof of the Granite Street parking garage, and the south end of the Mile High field.

Gottlieb said a safe “fall-out zone” will be in place to ensure against fireworks-related wildfire.

“If rational heads prevail, a fall-out zone is safe regardless of what’s going on (with fire restrictions),” Gottlieb said, noting that the display is handled by fireworks professionals.

Still, like last year, wildfire worries could interfere with the fireworks plans.

In a May 30 email, Prescott Fire Chief Dennis Light said a final decision has yet to be made on this year’s fireworks display.

“We are in Stage II fire restrictions, which was the case last year,” Light wrote. “That said, it’s a little premature for us to make a determination, as much can change in a month when it comes to the weather.”

On Thursday, May 31, Light pointed out that the start of the monsoons has been recorded as early as June 16, and as late as July 25.

“With that big a target area, it’s hard to nail it down yet,” Light said, noting that an early start of the rainy season could alleviate wildfire concerns before the Fourth of July holiday.

In 2017, Prescott ended up canceling its fireworks display the day before the 4th for a number of wildfire-related reasons.

“The decision to cancel the fireworks was not made lightly, but was done with public safety in mind,” stated a July 3, 2017 news release from the city.

At that time, Light cited factors such as: general welfare and health of the community; the June/July 2017 Goodwin Fire, which was about 75 percent contained by that time; and the fatigue factor related to first responders.

This week — with July 4 still more than a month away — Light said, continued dry weather through June and early July would result in “two choices” for the city. “First, we can opt to ‘manage the risk’ and allow the show to take place in full or on a limited basis; or second, we can opt to ‘eliminate the risk’ at which time I’d be inclined to cancel the show.”

The decision will come down to safety, Light said. “If there’s a way to do it safely, I would probably give it the nod,” he said. But if the fireworks were to endanger the community, he said he would opt for cancellation. He expects a final decision sometime between June 29 and July 2.

Wildfire concerns have long been a concern for the city as July 4 approaches. For years, the city conducted its July 4 celebration and fireworks at Pioneer Park in northeast Prescott, and multiple precautions were taken to prevent fireworks-related fires. The show usually went on despite varying degrees of drought and wildfire danger.

The celebration moved to downtown Prescott two years ago, after the city began contracting out the July 4 event.

A fireworks display took place from the roof of the downtown parking garage for the first time in 2016.

That display generated numerous complaints in the community over its smaller scale. In 2017, Gottlieb was planning for a larger and higher fireworks display before the event was canceled over wildfire concerns.

This year, Gottlieb’s Eagle Management and Events, LLC is once again handling the organization and promotion of the event.

Patti Colvin, administrative coordinator with the city’s Recreation Services Department, said this year’s contract with Eagle Management was a renewal of last year’s agreement, which had a three-year option for renewal.

The contract involves no financial contribution from the city, Colvin said.

Gottlieb’s website at www.prescottevent.net lists a host of activities, starting at noon July 4, and culminating with the fireworks.

General admission to the event is $5 per person, and a $10 unlimited pass is available for children for use of the inflatables.

Gottlieb said last year’s cancellation of the fireworks significantly affected attendance at the 2017 July 4 celebration. “It was about half,” he said, estimating that about 2,000 people attended. He is hoping for about 4,000 this year.

In addition, Gottlieb estimates that the fireworks display attracts 7,000 to 8,000 people to the downtown area.

Prescott cancels July 4 fireworks, Independence Day celebration will proceed
Prescott Valley fireworks is on; Prescott’s display is canceled
New Prescott fireworks venue changes wildfire scenario
Ring in Fourth of July at Watson Lake
Fire Chiefs: ‘If it was entirely up to just us, we would not allow fireworks at any time’