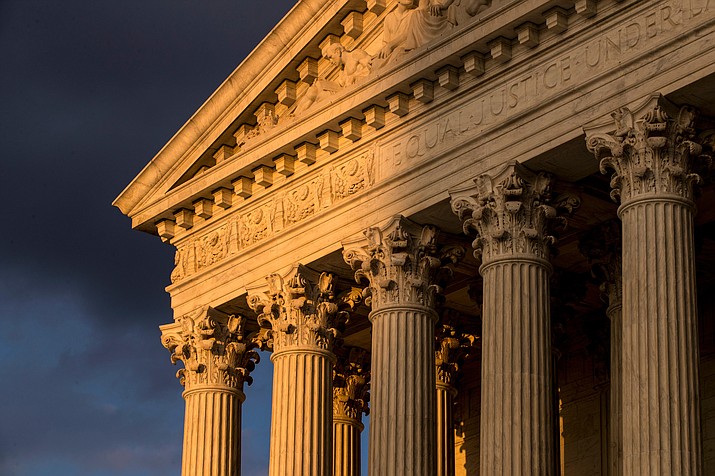 In this Oct. 10, 2017, file photo, the Supreme Court in Washington is seen at sunset. A flood of lawsuits over LGBT rights is making its way through the courts and will continue, no matter the outcome in the Supreme Court's highly anticipated decision in the case of a Colorado baker who would not create a wedding cake for a same-sex couple. (AP Photo/J. Scott Applewhite, File)

WASHINGTON (AP) – A flood of lawsuits over LGBT rights is making its way through courts and will continue, no matter the outcome in the Supreme Court's highly anticipated decision in the case of a Colorado baker who would not create a wedding cake for a same-sex couple.

Courts are engaged in two broad types of cases on this issue, weighing whether sex discrimination laws apply to LGBT people and also whether businesses can assert religious objections to avoid complying with anti-discrimination measures in serving customers, hiring and firing employees, providing health care and placing children with foster or adoptive parents.

The outcome of baker Jack Phillips' fight at the Supreme Court could indicate how willing the justices are to carve out exceptions to anti-discrimination laws; that's something the court has refused to do in the areas of race and sex.

The result was hard to predict based on arguments in December. But however the justices rule, it won't be their last word on the topic.

Religious conservatives have gotten a big boost from the Trump administration, which has taken a more restrictive view of LGBT rights and intervened on their side in several cases, including Phillips'.

"There is a constellation of hugely significant cases that are likely to be heard by the court in the near future and those are going to significantly shape the legal landscape going forward," said Shannon Minter, legal director of the National Center for Lesbian Rights.

Several legal disputes are pending over wedding services, similar to the Phillips case. Video producers, graphic artists and florists are among business owners who say they oppose same-sex marriage on religious grounds and don't want to participate in same-sex weddings. They live in the 21 states that have anti-discrimination laws that specifically include gay and lesbian people.

In California and Texas, courts are dealing with lawsuits over the refusal of hospitals, citing religious beliefs, to perform hysterectomies on people transitioning from female to male. In Michigan, the American Civil Liberties Union filed suit against the state's practice of allowing faith-based child placement agencies to reject same-sex couples.

Advocates of both sides see the essence of these cases in starkly different terms.