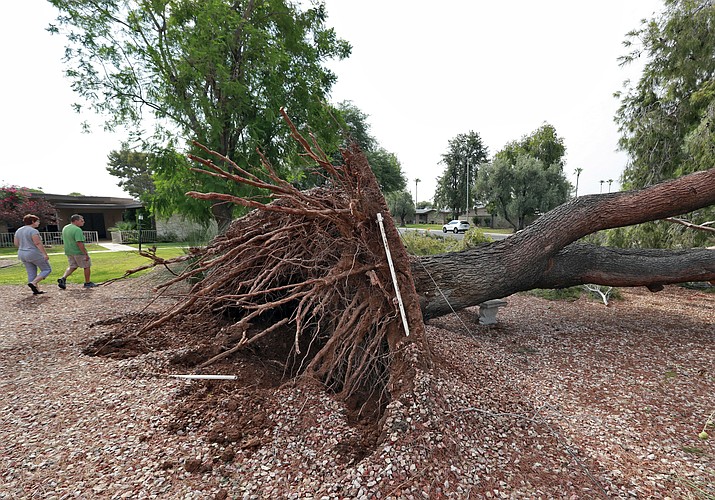 SUN CITY, Ariz. — A lightning strike apparently resulted in the death of an 89-year-old woman who was removed from her burning home by firefighters when strong storms lashed the Phoenix area, authorities said Tuesday.

Maricopa County sheriff's Sgt. Joaquin Enriquez said firefighters performed CPR after finding the woman unconscious and unresponsive in a bedroom of her Sun City home but that she was pronounced dead at a hospital.

Her identity and cause of death weren't released, and Enriquez said the investigation was ongoing.

The National Weather Service reported that Glendale Municipal Airport and Phoenix Deer Valley Airport recorded winds of 74 mph (119 kph) while Luke Air Force Base in Glendale had winds up to 69 mph (111 kph).

Winds downed power lines, uprooted trees across the metro area and blew off part of a roof of a building at an apartment complex in Glendale as blowing dust cut visibility for drivers in some areas.

Electric utilities reported that a total of more than 120,000 customers lost power Monday night but that the vast majority saw power restored by Tuesday morning.

A senior housing facility operated by the city of Phoenix near downtown remained without power Tuesday, and firefighters helped staff move residents to the ground floor.

Portable generators and air conditioners were brought in to cool residents, including those who choose to stay at the facility and those preparing to be temporarily located to another facility, Fire Capt. Jake Van Hook said.

Power for some of the lights went out in Chase Field in downtown Phoenix, delaying the game between Arizona Diamondbacks and Texas Rangers for 21 minutes during the sixth inning.