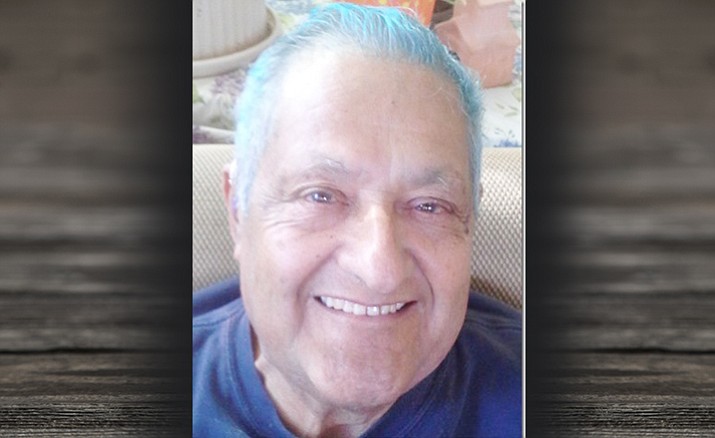 Richard Vallejo passed away unexpectedly, in Prescott, Az., on July 24, 2018, at the age of 83. Richard was born in Dallas, Texas, on May 18, 1935, to Juan and Dolores (Gomez) Vallejo. After high school Richard enlisted in the U.S. Navy as an Aviation Ordnanceman, and continued in the Navy Reserves. Later, he transferred to the Arizona National Guard and served a deployment in Saudi Arabia during Desert Storm and soon thereafter retired in 1992. In 1979 he moved his family to Prescott from Glendale, Ca. – he loved Prescott with all of his heart. Richard worked for the City of Prescott in the Street Department for 18 years, eventually retiring in 2000. His amazing work ethic was not lost with his children. He was a dedicated family man, who was kind-hearted, loving, and a jokester at heart. He loved going camping and being outdoors with his family and friends. He was an avid reader and loved to watch old war movies. He traveled travel the world with his wife; he visited China, Europe, Korea, Mexico and Central America. He traveled to all four corners of the United States to include Alaska and Hawaii. But mostly he loved to travel to see his children and grandchildren when they were stationed in various parts of the country and world. Richard is survived by his beloved wife of 57 years, Annie; his children, Rene Vallejo (former spouse Dawn Thomas) of Prescott, Monica Wilson (Michael) of Rineyville, Ky.; and Tim Vallejo (Anisa) of Woodland, Ca. He was grandfather to seven grandchildren and two great-grandchildren – Clay (Germany), Cole (Long Beach, Ca.), and Cady Beth Wilson (Rineyville, Ky.); Madison (Mesa), and Chloe Vallejo (Prescott); Anjuna and Saeed Vallejo (Woodland, Ca.). And two great grandchildren – Gerard Vallejo (Prescott) and Dean Michael Wilson (Germany). Richard was also survived by four brothers – Roberto, Antonio, Juan and Carmen Vallejo, all of Texas. He was preceded in death by his mother, Dolores Vallejo; his sister, Juanita Ortiz; and daughter, Sabrina Vallejo Misterka. A celebration of his life will be held at Sacred Heart Catholic Church on Wednesday, Aug. 1, with a rosary starting at 10:30 a.m., followed by a mass at 11 a.m., 150 Fleury St., Prescott, AZ 86301. Interment at Prescott National Cemetery, 500 AZ-89, Prescott, AZ, 86303. Followed by a Reception/Luncheon at the American Legion, Post 6, 202 S. Pleasant St., Prescott, AZ 86303. In lieu of flowers the family suggests donations to the Community Cupboard, 313 W. Goodwin St., Prescott, AZ 86301 or PrescottCommunity