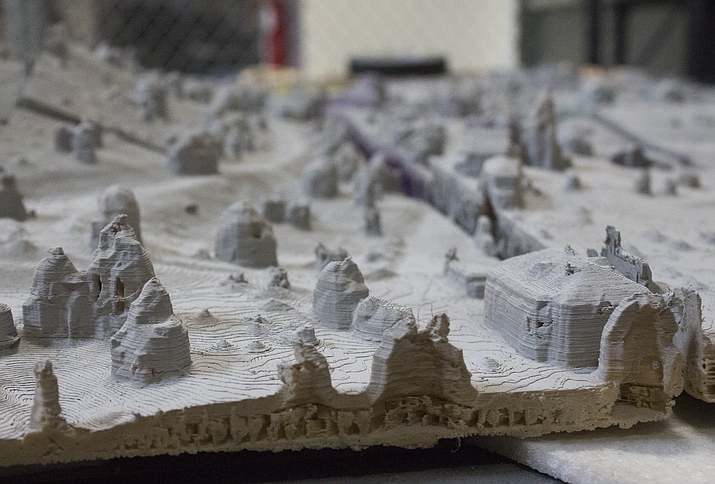 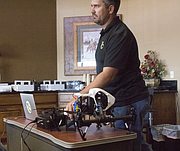 Matt Mintzmyer, head of the UAS program at Yavapai College, explains the process that he and the students went through to engineer the software and the 3D model of Yavapai College’s campus. (Holly Maller/Courtesy)

Drones — more formally termed Unmanned Aircraft System’s (UAS) — have no doubt grown in popularity in recent years. In addition, the jobs and tasks that drones can perform are becoming more innovative and complex.

Drones are increasingly being paired with different industries and technologies, and experts in the field are constantly thinking about and developing new uses for them.

For example, drones are becoming more and more popular in geological survey work, allowing for far more efficiency, accuracy and detail in comparison to traditional methods of land surveying.

Not only do drones have the ability to capture detailed photographs of land, but they can also assess elevation levels and vegetation.

Thousands of photographs are taken that are then stitched together to create accurate representations of considerable chunks of land, including 3D digital models.

3D printing, also known as additive manufacturing, is a process that takes computer-generated files and prints them into 3D objects using a liquefied filament which solidifies upon completion.

Matt Mintzmyer, head of the UAS program at Yavapai College, came up with the idea to take his geological survey work done by drones and begin 3D printing models of the land.

The first large scale project pursued by the program is a model of the 200 acre, main Yavapai College campus in Prescott.

The survey captured around 2750 photos, which translated to 70 individual 3D prints and an approximately 22 square foot, to-scale model.

With extremely little published material on how to convert digital models to 3D printable files, Mintzmyer and his team of students had to create a procedure themselves that would successfully 3D print this type of large-scale survey.

“It took about two months and a lot of trial and error to figure out a scientific method and process to make it work,” states Mintzmyer, who allowed his students to play a considerable part in the project.

Evan White, one of the students in the Aerospace Science program at Yavapai College, was a key player in the development of the intricate process.

“After a few students tried and couldn’t figure it out, I took it on. It was frustrating that there wasn’t already a process for it … We started out by printing smaller scale like the Chino Valley Yavapai College campus. As we then developed the process, we continued to size up, and we ran into more problems,” said White, who according to Mintzmyer, put well over 80 hours into the purely voluntary project.

“It was a fun challenge,” exclaims White.

With no record of similar large-scale projects being done, White and Mintzmyer had to gather information from small-scale projects, such as individual houses.

“The hardest part was figuring out the makerbot settings to avoid warping, but also just figuring out what software to use to get exactly what we wanted … We used three or four different programs. Each of those programs have a certain thing that they’re good at and can do … none of them can do all of it,” explains White.

With such an intricate learning curve, Mintzmyer is working to develop an instruction manual to integrate into the program for 3D printing/drone combined projects.

Including this in the program will make students more marketable and more employable.

“The goal when they’re done with this program is that then they will have another tool to use to sell their businesses to. The students can go out there and have a valuable skillset that they can make a lot of money with,” states Mintzmyer.

A prime example of the marketability of such projects is Mintzmyer’s current and ongoing collaboration with the City of Prescott.

The print of the Yavapai College main campus was more so about experimentation and learning the necessary steps to 3D print drone data.

Now, Mintzmyer is using his UAS-expertise to aid in the construction and presentation of the roughly 160-acre space, with plans to print a 3D model that outlines the trails and represents them accurately.