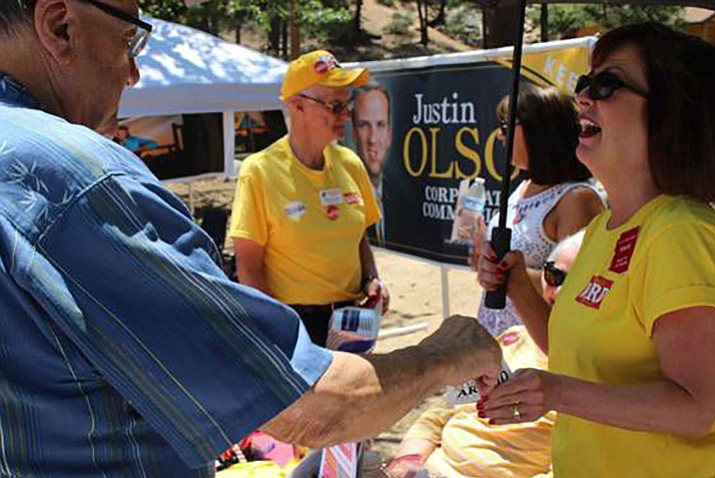 Both Ward and Arpaio are vying for Sen. Jeff Flake’s seat in Congress when he retires in January.

According to Arpaio, the alleged incident occurred as a Ward volunteer – identified as Mardi Allen Benedict in photos taken at the time – exchanged campaign trinkets with the 86-year-old former Maricopa County sheriff as the daylong event drew to a close.

“I gave the staffer one of my campaign stickers and she gave me a Kelli Ward pin,” Arpaio said. “I believe Ward saw the exchange … and grabbed the pin, got mad and threw it to the ground … but instead, it hit my director of communications.”

Prior to the alleged altercation that occurred following lunch, Arpaio says there was a separate purported event that raised concerns throughout his campaign team including Tania Burgess, Arpaio’s director of communications.

“Everybody wanted to engage and take pictures with Joe – including people with Kelli Ward shirts on – as soon as we arrived at the picnic,” Burgess said. “I thought that Ward started stewing and I felt that something was fixing to happen, so I started taking pictures.”

Burgess said that Ward made a beeline straight toward Arpaio, allegedly slapping him on the shoulder while making a “smart-alecky” remark.

“We just brushed that incident off,” Burgess added.

Following the picnic, Arpaio decided to stay for about another hour to again mingle with voters when the second altercation purportedly happened.

Burgess confirmed Arpaio’s recollection of how the event unfolded, adding that the Ward campaign pin and Arpaio campaign sticker exchange was nothing more than a demonstration of good sportsmanship.

Burgess added that Ward allegedly grabbed her campaign pin out of Arpaio’s hand, while inadvertently opening the clasp.

"Kelli Ward threw it back across Sheriff's Joe's chest, but it struck me right in the arm," Burgess said. "It was really only a pinprick, but it was mindboggling she would act like this."

Although Burgess believes Ward’s actions constituted an assault, her boss has different feelings.

“I don’t know about an assault," Arpaio said. "It just shows people her childish behavior. You shouldn’t punish a volunteer just because they were decent enough to say hello to me. I’m not planning to file assault charges; I’m planning to beat her in the election.”

At press time, Ward along with Benedict did not return electronic inquiries for a statement.