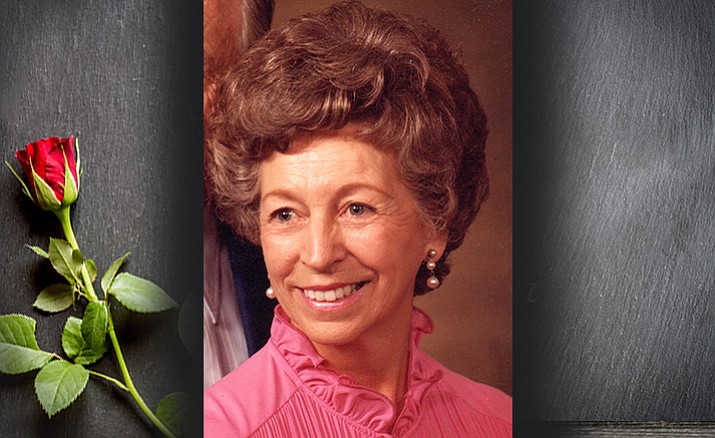 On Saturday, July 21, 2018, our beloved, gentle mother, grandmother and great-grandmother, Eva Jeanne Nebeker, passed away peacefully after a lengthy illness, at 93 years of age.

Her last days were spent at Peaceful Valley Care Home. Jeanne’s family wants to thank their staff and the hospice nurses who gave her such loving care during her last months.

Jeanne was born in Kimberly, Idaho, to her proud parents, Ameal and Estella Hansing. Her family moved to Twin Falls, Idaho, where she grew up on a farm with four brothers and elder sister. Jeanne did most of the cooking for them all, while her parents and brothers worked the fields.

Jeanne attended school and soon met the love of her life, Ted R. Nebeker, and they married on Feb. 4, 1942. She had one child, Bill Joe Nebeker.

Because of Bill’s extended struggle with asthma, their doctor advised them to move to Prescott, Arizona, for its clear, clean air in 1953, and she loved living here the rest of her life.

As she grew up on the farm, Jeanne learned the old-fashioned work ethic. Besides keeping her own home spotless and cooking for all Bill’s friends, she was employed by the City of Prescott and J.C. Penney’s. Jeanne’s kitchen was always filled with Bill’s friends who couldn’t get enough of her freshly baked cinnamon rolls or crème puffs. Her serene, gracious and lovely home was always welcoming. Through four decades, Jeanne and her husband owned and operated several businesses in town: Auto Rest Motel, Buena Vista Motel, Heritage House Motel, Sierra Motel, The Cattlemen’s Shop Western Wear, and Don Juan Apartments. Jeanne and Ted were longtime members of Smoki People.

Shy upon first meeting, people would soon learn that Jeanne loved to laugh, tell stories, dance, listen to music and travel across America in their travel trailer, especially to Jackson Hole, Wyoming, and the Tetons.

The epitome of grace, kindness, serenity and loveliness, Jeanne was always a Lady. Jeanne was predeceased by her husband of 66 years, Ted R. Nebeker; her parents, Ameal and Estella Hansing; her brothers, Merle, Richard and Bob Hansing; and sister, Wilma Kohntopp. She is survived by her son, Bill (Merry) Nebeker; grandchildren, Travis (Sara) Nebeker of Chino Valley, Heather (Sean) Davis of Prescott Valley, and Jeannie (Jeremy) Hilderbrand of Marana; seven great-grandchildren; her brother, Dave (Joanne) Hansing of Carey, Idaho; many nieces and nephews, as well as life-long friend, Aletha Orchard of Prescott.

Ruffner-Wakelin Funeral Home, 303 S. Cortez St., Prescott, will hold her memorial service at 11 a.m. Friday, Aug. 3. Officiating will be Pastor Don McMillan of American Lutheran Church. Interment will be private, for family and close friends only. Funeral arrangements entrusted to Ruffner-Wakelin Funeral Homes. Please log on to www.ruffnerwakelin.com to sign Eva’s guestbook and share a memory with the family.