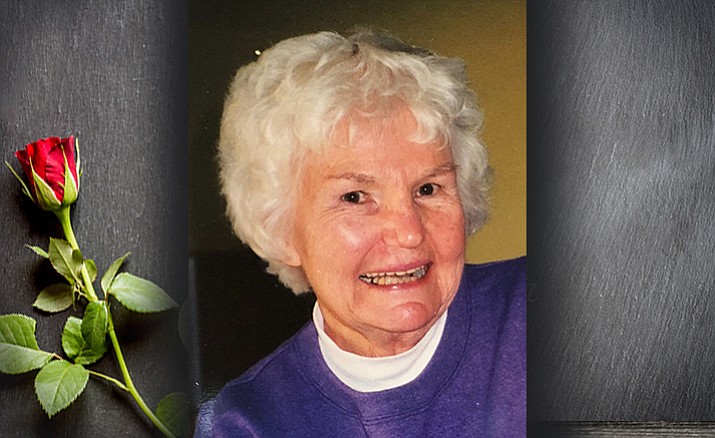 Anna (“Ann,” “Annie”) Smith passed peacefully in her home surrounded by her family on July 7, 2018. Born in Chicago on April 6, 1929, she graduated from South Shore High School and a few months later, married the love of her life, and next-door neighbor, Robert “Bob” Smith.

A few years later, Ann and Bob moved to Northwest Indiana, where they raised their four children. Ann worked tirelessly as a homemaker and was actively involved in her children’s lives. After being widowed at 45, she moved to San Jose, California, with her younger son and daughter. There she returned to the workforce, but enjoyed an active social life and spent time with her children and extended family. After retiring, she moved to Encinitas, California, where her daughters lived, and volunteered at the local hospital.

Ann moved to Prescott, Arizona, in 1995, into the house her father and step-mother had built, close to her beloved sister, Joan, and brother-in-law, Wally Warren. She developed an extensive number of friends in the neighborhood, as well as from her membership in the Lioness Club and Emmanuel Lutheran Church. Ann enjoyed socializing with her friends and family, playing the bells and serving as a greeter at her church, and relished her annual spring flower planting.

Ann was blessed with good health until her last few years. She remained independent and resilient after her diagnosis and subsequent debilitating treatment for cancer. Throughout this trying time, she retained her sense of humor, compassion for others, and her interest in current events. Ann would have been so thrilled to know the young Thai soccer players and their assistant coach were successfully rescued from the cave.

Ann was pre-deceased by her mother, husband, father, step-mother, sister, brother and two daughters-in-law. She is survived by her four children, Brian, Kathy and Gary Smith, and Karen and her husband Jerry Easton; one grandson and three great-grandchildren; her two sisters-in-law and her brother-in-law; and numerous nieces and nephews.

A celebration of Ann’s life will be held at 1 p.m. Friday, Aug. 10, at Heritage Memory Mortuary, 131 Grove Ave., Prescott. In lieu of flowers, her children request everyone contribute to his/her favorite charity.