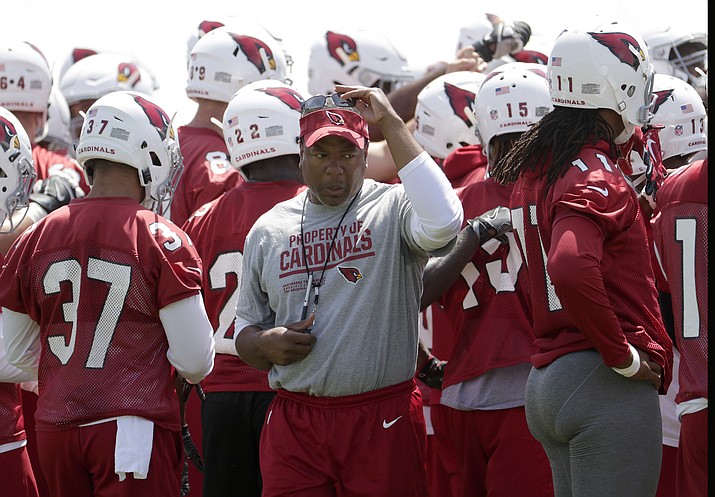 Arizona Cardinals head coach Steve Wilks walks away from the huddle during practice at training camp June 5, 2018, in Tempe. Wilks and the Cardinals enter preseason camp this week without their general manager Steve Keim, who was suspended for five weeks and fined $200,000 by the team following his July 4 DUI arrest. (Matt York/AP, file)

GLENDALE — The Arizona Cardinals have their star running back but are without their general manager as they open their first training camp under new coach Steve Wilks.

Running back David Johnson returned to the fold this week after sitting out mandatory minicamp in a contract dispute.

“It means a lot” to have Johnson back, Wilks said after players reported Friday. “We talked about from day one that he is a major part of what we’re doing. I’m glad to see him back. He came back last Sunday on the 22nd very focused, very committed. He’s in shape and looking good and I’m expecting some great things out of him this year.”

The team added three players the past two days, despite the absence of general manager Steve Keim, who was suspended for five weeks and fined $200,000 by the team following his July 4 DUI arrest.

Cardinals President Michael Bidwill doesn’t often speak to the media but he took the opportunity to do so after the players reported and went through their conditioning test.

Bidwill said that, as far as he knew, it was the largest penalty ever for a driving under the influence incident by someone connected to the NFL.

“I came down hard on him and he knew that was going to be the case in the early conversations (after the arrest),” Bidwill said. “I think it’s important for everybody now in this day and age there’s no excuse to drink and drive. We have Lyft, we have Uber, and there are consequences for the person to be arrested. People can be hurt or killed.”

Bidwill has stepped in to take a more active role and said that Keim and his team have been together so long that it’s easy to determine what the general manager’s position would be if he were there, although no contact with the GM is allowed.

“We have taken the philosophy that in his absence we are going to try to make the kind of decisions Steve Keim would make,” Bidwill said.

Quarterback Sam Bradford was excused from Friday’s run test but is expected to be a full participant, as the No. 1 quarterback, when workouts begin Saturday. Bradford was brought along slowly in offseason workouts as he works his way back from a knee injury that wiped out nearly all of his season a year ago.

Rookie Josh Rosen has been praised for his offseason work and will be competing with Mike Glennon for the backup job.

Johnson led the NFL in yards from scrimmage two seasons ago but fractured his left wrist in last year’s opener and missed the rest of the season. As his representatives and the Cardinals talk about a contract, Johnson decided to come to camp rather than continue the holdout that began in minicamp.

“I wanted to be with the team at the start of camp,” Johnson said. “I wanted to bounce back from last year, the injury.”

Johnson said he doesn’t know how close the parties are to a contract agreement and is leaving it to his agents to deal with. Bidwill said it is possible for the Cardinals and Johnson to reach an agreement despite Keim’s absence.

“My biggest thing is I was proud for him,” Johnson said. “I trained with Gurley coming out of college and it was cool to see him get what he deserves. Not only him, but to see Saquon (Barkley) get his deal. It’s just good to see running backs get deals.”

Boston came back to the Cardinals after criticizing the team’s initial offer following a visit earlier in the free agent period. He agreed to a $1.5 million contract that can reach $3 million with incentives, far less than he expected to get when he entered free agency after a strong season last year with the LA Chargers.

Boston set career highs last year with 79 tackles, five interceptions and seven passes defensed. He figures another year like that will get him the money he already believes he deserves.

Boston played four years for Carolina with Wilks as the defensive backs coach and joked that the players called the coach Denzel Washington because of the way he resembles the actor.

“A great coach, one of my favorite coaches,” Boston said. “It reminds me of Denzel Washington, the way he coaches. That was our joke back in Carolina, man. But he’s a great coach. He has a vision, a laser-like focus, somebody who motivates you to be better. You don’t want to let him down.”