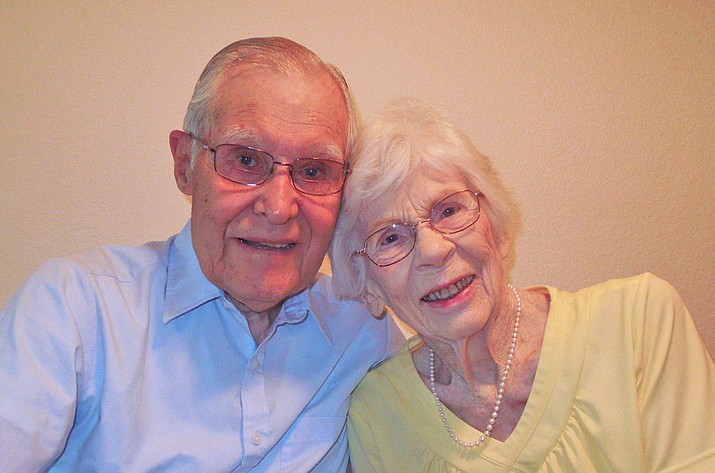 Seventy years ago on July 24, Bob and Evelyn Reek married in Evelyn’s hometown of Ashtabula, Ohio. Bob, whose home was Maywood, Illinois, a suburb of Chicago, worked for Automatic Electric Company the previous year helping to install Ashtabula’s first dial telephone system. In September of that year, he met Evelyn at a party at the home of Evelyn’s best girlfriend, where Bob was boarding at the time. It was ‘love at first sight’ and 10 months later, they were wed.

They made their first homes in Bellwood, Illinois, another close-by Chicago suburb, where they began to raise their family and where their children, Janis, Kenneth, and Nancy were born. Eight years after their marriage, they moved the family to Mount Prospect, Illinois a northwest suburb of Chicago to be closer to Bob’s job in the Research and Development organization of Teletype Corporation in Skokie, Illinois.

They resided in Mount Prospect for 30 years, where both Bob and Evelyn were active in the community and in their Presbyterian Church. Following Bob’s retirement from Teletype Corporation in 1975, they began traveling the United States, searching for genealogical information about their ancestors and looking for likely places to spend retirement years. International travel was also enjoyed.

They found Prescott, Arizona through a former Mount Prospect neighbor, visited and bought a home in March of 1986 and moved the following September. They enjoy the friendliness and smaller town atmosphere here, and most importantly, the climate is more moderate than in Chicago.

They celebrated with a family dinner and reminiscing with their children during the week of the anniversary.