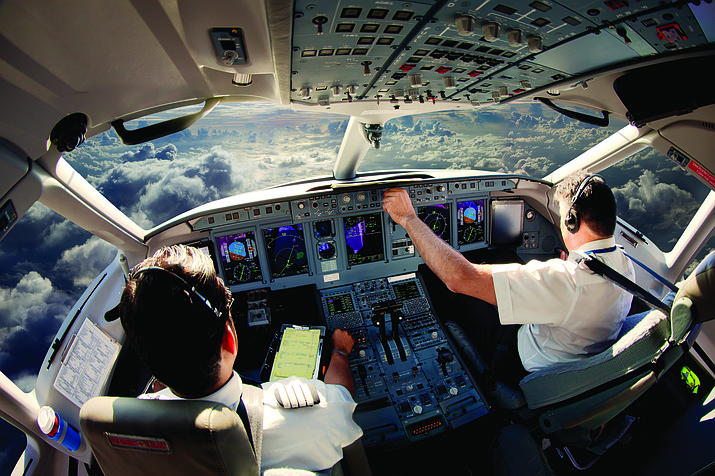 About 790,000 professional pilots will be required to fill commercial cockpits in the next 20 years, according to a study from the Boeing Company that was released Monday, July 23, 2018. (Petrovalexey/Adobe Stock)

Over the next 20 years, 790,000 professional pilots will be required to fill commercial cockpits, according to information from the Boeing Company, which was released Monday, July 23.

“Despite strong global air traffic growth, the aviation industry continues to face a pilot labor supply challenge, raising concern about the existence of a global pilot shortage in the near term,” said Keith Cooper, vice president of training and professional services at Boeing Global Services.

“An emphasis on developing the next generation of pilots is key to help mitigate this. With a network of training campuses and relationships with flight schools around the globe, Boeing partners with customers, governments, and educational institutions to help ensure the market is ready to meet this significant pilot demand.”

“Hiring right now is going real well,” Embry-Riddle Aeronautical University’s Dean of the College of Aviation, Dr. Tim Holt, said. “Pay and benefits have been on the rise for the last couple of years … it’s at a good point right now.”

Holt added that flight schools are doing a booming business.

“With the need going up, obviously, word has spread, and collegiate programs such as ours are seeing more comng through, so the flight school has been pretty busy,” he said.

“A lot of it is the economy; and another one is countries like China and other countries (in Asia) are starting to grow and their aviation industries are growing quite a bit,” he said.

“They (the FAA) also lowered the retirement age … so there’s a lot of companies are looking for pilots.”

Pilots typically build hours in the air as instructors at flight schools, heading for the magic number — 1,500 hours of experience in aircraft, including 250 hours as pilot-in-command (PIC) — to be eligible to hold an Airline Transport Pilot (ATP) certificate. An ATP means the pilot can fly a multi-engine commercial airliner, usually from the second-in-command, or right seat, position. Airlines, however, used to look for pilots with more than the minimum hours.

He pointed to a recent development in which Mokulele Airlines in Hawaii has entered with Yavapai College and Prescott’s North-Aire Aviation in a deal that will keep the airline supplied with freshly minted pilots.

Because Mokulele — and some other airlines — fly the Cessna Caravan, a single-engine turboprop that seats nine passengers for which an ATP is not required; pilots can hold a commercial certificate, which they can test for with just 250 flight hours logged.

“They’re going to be second-in-command for a while, until they get their experience up, and then they switch over to pilot-in-command,” Mintzmyer said. “A small commuter plane like the Cessna Caravan, a lot of these companies are just hiring (with) 300 hours.”

But, he said, safety is not an issue.

“Anybody we sign off through Yavapai College or North-Aire, we wouldn’t sign them off for a rating unless we feel comfortable they’re safe and proficient pilots,” he said. “I won’t, personally, sign anyone off unless I feel comfortable with my family being on board their aircraft.”