"Some ‘Change for the Better’ ideas catch on; others flounder 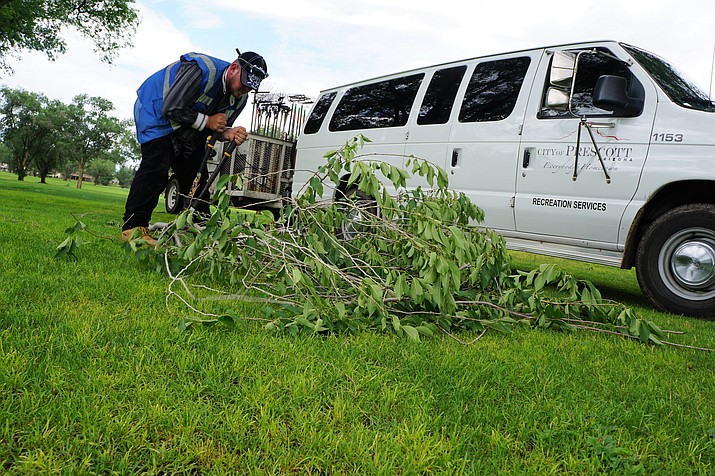 Daniel Birchum, one of the workers in the Coalition for Compassion and Justice (CCJ)/City of Prescott homeless work program cuts a tree limb into smaller pieces before disposing of it. Birchum was among the crew members picking up debris at the Antelope Hills Golf Course after a monsoon storm this past week. (Cindy Barks/Courier)

Picking up trash and debris vs. panhandling: For a group of past and present residents of the Coalition for Compassion and Justice’s homeless shelter, it’s no contest.

Prescott’s recent “experiment” on how best to reduce panhandling on city streets has had mixed results, say city officials.

Tyler Goodman, the city’s special projects and legislative coordinator, reported last week that some of ideas have caught on in the community, while others have not.

Among the apparent early successes is the Coalition for Compassion and Justice’s (CCJ) work program that has offered steady jobs to residents of the organization’s Madison Street shelter.

Baynes was on hand when the crew helped to clean out the stalls at the rodeo grounds after the July 4 World’s Oldest Rodeo, and he said the workers took on the difficult task with good spirits.

Another program that has had a positive start is the installation of parking meter-style donation boxes in downtown Prescott. Signs on the meters ask passers-by to donate their loose change to efforts that help the homeless, rather than giving to panhandlers.

Goodman said the four meters are typically full each week when the money is collected. Over the past couple of months, he said, the meters have generated about $90 to $100 per week — for a total of about $900 so far.

The city plans to begin distributing that money soon to the organizations that have applied and are qualified to receive it.

Because of the early success, Goodman said the city is looking at installing more of the donation meters in the downtown area.

The signs at problem intersections that discourage people from giving to panhandlers, as well as the armrests installed on park benches to prevent people from lying down, also appear to be working toward the city’s goals.

Both Goodman and Baynes said panhandling and loitering appear to be down in recent months, although the evidence is largely anecdotal.

On the other hand, the donation boxes that the city offered to distribute to local organizations, churches, and businesses have been less successful. Only five were given out, and Goodman said some of the participants have voiced concerns about having the cash boxes setting out in the open in businesses.

“This was really one big experiment, and we’re seeing what’s taking,” Goodman said of the Change for the Better program. “The meters have taken, but the boxes have not.”

Likewise, the city’s effort to contract with a local organization to provide downtown ambassador/security services failed to attract any interest. “There were no bids, no proposals,” Goodman said.

The Prescott City Council approved the “Change for the Better” program in April. One of the factors driving it was the intimidation that some people felt when being approached by panhandlers. Under Change for the Better, Goodman said, “You can give in a safe way, and to somebody who needs it.”