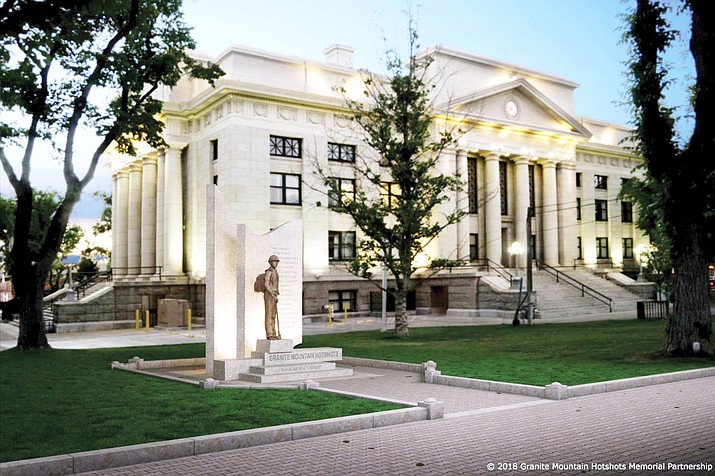 The Granite Mountain Hotshots Memorial Partnership has released an artist’s rendering of the memorial that is planned for the Yavapai County Courthouse Plaza to honor the 19 Granite Mountain Hotshots who died fighting the June 2013 Yarnell Hill Fire. From the front, the memorial – designed by Arizona sculptor Deborah Fellows – features a bronze Hotshot statue alongside the names of the fallen. And from the back, the sculpture’s granite slabs will feature an etching of the giant alligator juniper that the Hotshots saved during the Doce Fire just days before they died in the Yarnell Hill Fire.

A public presentation on the Hotshots memorial planned for the Yavapai County Courthouse Plaza will take place during the Prescott City Council meeting Tuesday, July 24.

The presentation is scheduled for the council’s voting session at 3 p.m. Tuesday, at Prescott City Hall, 201 S. Cortez St.

With a larger-than-life Hotshot statue as the focal point, the piece is being planned to incorporate the three elements that local residents most wanted to see included: granite, alligator juniper, and bronze, with a carving of the juniper tree that the Hotshots saved in the back.

Tuesday’s presentation is expected to outline the details of the memorial, which is planned to be in place within the next year.

In other action, the council will consider an amendment for the ongoing data collection in the Big Chino sub-basin. The city’s portion of the $94,850 cost is $34,380.

The data collection is a part of a 2012 comprehensive agreement between the city and the Salt River Project and the Town of Prescott Valley for an enhanced groundwater and surface water monitoring system, as well as generation of a more refined groundwater model.