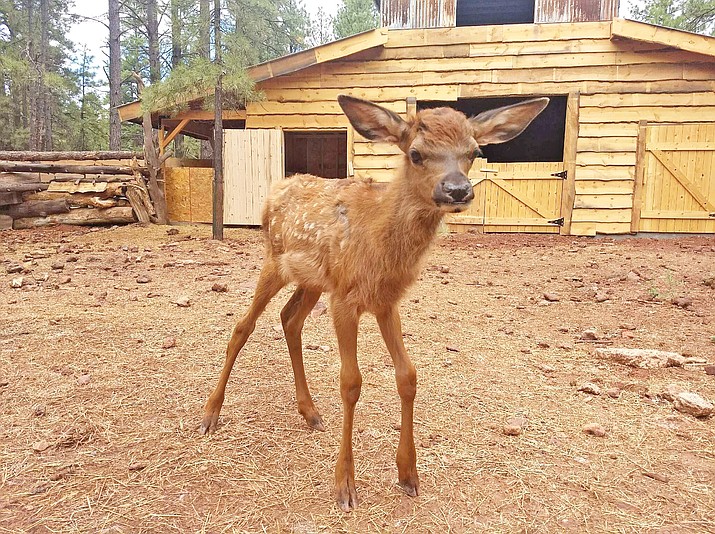 Lucky, an elk calf has fully recovered one month after being delivered on the side of Interstate 40 after her mother was struck by a vehicle. (Bearizona/Courtesy)

Good fortune was with a newborn elk in the early morning hours of June 10. Not so much its mother who was struck and killed on I-40 near Flagstaff.

Prescott resident Brenda Clark was heading home in her motorhome at 5:30 that Sunday morning when she saw something “flopping” on the side of the freeway. A smashed-up SUV and a semi-truck were parked nearby. The woman in the vehicle was not hurt, but the pregnant female elk the SUV struck was killed.

Clark at first thought the baby elk had been hit.

“She was still soaking wet and still had the slime on when they get born. The mom was 20 feet away and had already passed away,” Clark said. “I think she was born on impact.” 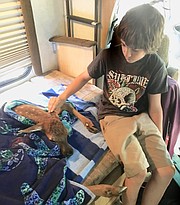 Brayden Couch, 13, sits next to Lucky, a baby elk about two hours old, after it was rescued near Flagstaff. (Brenda Clark/Courtesy)

She used towels to dry off the baby elk, which had four or five bad road rash scrapes. Flagstaff Fire Department and Department of Public Service officers arrived and started making calls to the Arizona Game and Fish Department, but it was still too early and they were unable to reach anyone.

After a tow truck removed the SUV, someone suggested calling Bearizona, a 160-acre wildlife rescue park and conservation organization. Clark offered to transport the baby elk in her motorhome located off I-40 and Historic Route 66 in Williams.

No one at Bearizona was answering phones so early in the morning, but as she arrived at the park, she learned that DPS had gotten hold of the owner, Sean Casey, who met her there.

Clark’s children – a son, 13, and daughter, 15 – and her nephew and friend, participated in the rescue mission and named the tiny creature “Lucky.”

“The kids suggested the name Lucky. First, she was lucky to survive the accident and we were so lucky Bearizona opened at 8 a.m. on a Sunday and was able to take her in. She hadn’t been able to eat yet,” Clark said.

“I’m an ICU nurse. I know how fragile life is. I can’t believe she survived it. She got really lucky everything fell into place,” she said.

Dave O’Connell, Bearizona’s director of animal staff, said he rushed into work that morning and found Lucky bruised and cut up. The small animal required 20 staples.

“We got her all the care we could get her at the time,” O’Connell said. “We had no expectations she was going to make it – only hope. We didn’t know internally if anything was wrong.”

The first week, Lucky received around-the-clock care. Staff, including O’Connell, took Lucky home with them overnight in order to feed her elk formula every three hours.

“She’s doing great,” he said Wednesday, July 18. “Right now, she weighs 63.4 lbs., about double when we got her a month ago. She’s gaining weight every day and starting to nibble on the hay and pellets we have for her.”

Lucky is now healthy enough to be on display along with a recently rescued two-month-old pronghorn fawn. (Bearizona)

Lucky also has made a friend, Jessie, a pronghorn fawn whose “rescuers” mistakenly thought abandoned near Paulden about six weeks before Lucky’s arrival. Game and Fish officials were unable to safely reunite the fawn with its mother, fearing dogs would get to it first, so they called Bearizona, O’Connell said.

“It’s really a miracle. She’s healed up; she’s gotten huge. They were feeding her with a 2-liter bottle of milk, and she was following everybody around,” she said.

The public can see Lucky and Jessie at Bearizona daily from 8 a.m. to 4:30 p.m. They are located next to the bobcats and the reindeer barn. Bearizona is open until 6 p.m., but staff moves the young animals indoors for the night.