Trump heightens China tariff threat with no deal in sight 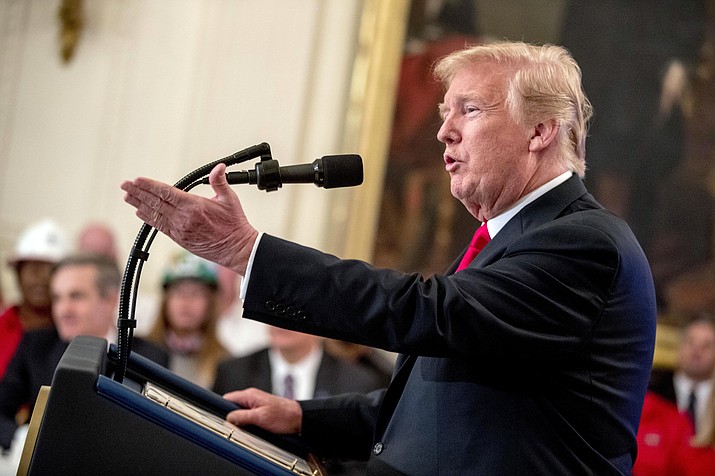 In this July 19, 2018 file photo, President Donald Trump speaks before signing an Executive Order that establishes a National Council for the American Worker during a ceremony in the East Room of the White House in Washington. Trump said he’s willing to hit all imported goods from China with tariffs, sending U.S. markets sliding before the opening bell, Friday, July 20. In a taped interview with the business channel CNBC, Trump said “I’m willing to go to 500,” referring roughly to the $505.5 in goods imported last year from China. (Andrew Harnik/AP, File)

WASHINGTON (AP) — With President Donald Trump intensifying his rift with U.S. trading partners, economists are growing more doubtful that any deal that might benefit American workers and companies is in sight.

Instead, many analysts say they expect the Trump administration to impose more tariffs on China and potentially other key U.S. trading partners. With those nations almost certain to retaliate, the result could be higher prices for Americans, diminished export sales and a weaker U.S. economy by next year.

In an interview with CNBC that aired Friday morning, Trump renewed his threat to ultimately slap tariffs on a total of $500 billion of imports from China — roughly equal to all the goods Beijing ships annually to the United States. The president has already imposed tariffs on $34 billion in Chinese goods, and Beijing has retaliated with tariffs on an equal amount of American exports. The White House has also itemized $200 billion of additional Chinese imports that it said may be subject to tariffs.

In addition, Trump has told the Commerce Department to investigate whether imported autos and auto parts threaten America’s national security — the same justification the president has invoked for other tariffs he has imposed or threatened, including on imported steel and aluminum. If the answer is yes, the administration says it could slap 20 percent to 25 percent tariffs on $335 billion of auto imports. Higher car prices for American consumers would inevitably follow.

On Friday morning, Trump for a second day also criticized the Federal Reserve, breaking with a long-standing tradition at the White House of avoiding any influence, real or perceived, on the independence of the U.S. central bank. Simultaneously, he accused China of allowing its tightly controlled currency to drift lower against the dollar, a move that could help Chinese exporters by making their goods more affordable overseas.

“China, the European Union and others have been manipulating their currencies and interest rates lower, while the U.S. is raising rates while the dollar gets stronger and stronger with each passing day — taking away our big competitive edge.”

Last month, the Fed raised its benchmark rate for a second time this year and projected two more increases in 2018. Its rate hikes are meant to prevent the economy from overheating and igniting high inflation. But rate increases also make borrowing costlier for households and companies and can weaken growth.

Analysts say they’re becoming more convinced that Trump’s multi-front trade fights aren’t merely a short-term negotiating ploy. Rather, he may be prepared to wait as long as he feels it necessary to force other countries to adopt trade rules more favorable to the United States.

“People are underestimating what we’re headed for,” said Rod Hunter, a lawyer who served as a White House economic adviser under President George W. Bush. “He’s been saying since the ‘80s that trade deals are bad and we should have more tariffs, and that’s what we’re getting.”

Moody’s Analytics estimates that if the tariffs were imposed on autos and most Chinese imports and other countries retaliate as expected, annual U.S. growth would slow by 0.5 percentage point by mid-2019. It expects that 700,000 jobs would be lost.

Global markets have remained generally calm despite the eruption of a full-blown U.S.-China trade war and the other conflicts Trump has ignited. On Friday, the Dow Jones industrial closed down slightly.

“I’ve been surprised that up until now, markets seem overly sanguine about the risks” of a trade war between the world’s two biggest economies, said David Dollar, senior fellow at the Brookings Institution and a former official at the World Bank and U.S. Treasury Department.

Investors as a whole appear to accept the argument of Trump economic advisers, notably Larry Kudlow and Kevin Hassett, that the president’s threats will likely force China, the European Union, Canada, and Mexico to eventually negotiate better trade deals.

But many analysts are skeptical that Trump’s tactics will produce such an outcome. Rufus Yerxa, president of the National Foreign Trade Council and formerly deputy director general of the World Trade Organization, said Trump appears to think that America’s trading partners will yield to pressure without securing any concessions in return.

China will likely retaliate if additional tariffs are imposed, economists note, rather than simply knuckle under. President Xi Jingping “cannot lose face with his own people by giving in to the United States,” Dollar said.

Philip Levy, a trade expert at the Chicago Council on Global Affairs and a former White House trade adviser, suggested that Chinese officials have been frustrated and confused by their previous failed efforts to reach an agreement.

After Beijing offered this spring to buy more natural gas and farm goods from the U.S. to narrow the trade deficit, Treasury Secretary Steven Mnuchin said the trade war was “on hold.” China also said it would reduce its auto tariffs from 25 percent to 15 percent.

“The Chinese are not clear what the United States wants,” said Scott Kennedy, who studies the Chinese economy at the Center for Strategic and International Studies. “They’ve received conflicting messages depending on who they speak with.”

The administration says it wants China to end the theft of intellectual property from U.S. companies and curb policies that require American and other foreign businesses to hand over technology in exchange for access to the Chinese market. Yet any such agreement would require extensive talks over how it would be implemented and verified.

“There’s no negotiating going on that I can see,” Dollar said.

In the CNBC interview that aired Friday, Trump reiterated his complaints about America’s gaping trade gap with China, even though reforming China’s technology policies wouldn’t likely narrow the trade deficit.

“We are being taken advantage of, and I don’t like it,” Trump said.

Economists note that Trump’s hard-nosed stance on trade runs deep. He has been denouncing other countries’ trade practices and urging retaliation for decades, dating to the 1980s, when Japan was regarded as America’s main global economic threat.

“You have to take seriously that (imposing tariffs) is what he really wants to do,” said Adam Posen, president of the Peterson Institute for International Economics.

In his CNBC interview Friday, Trump shrugged off the prospect that a trade war with China could cause the stock market to tumble.