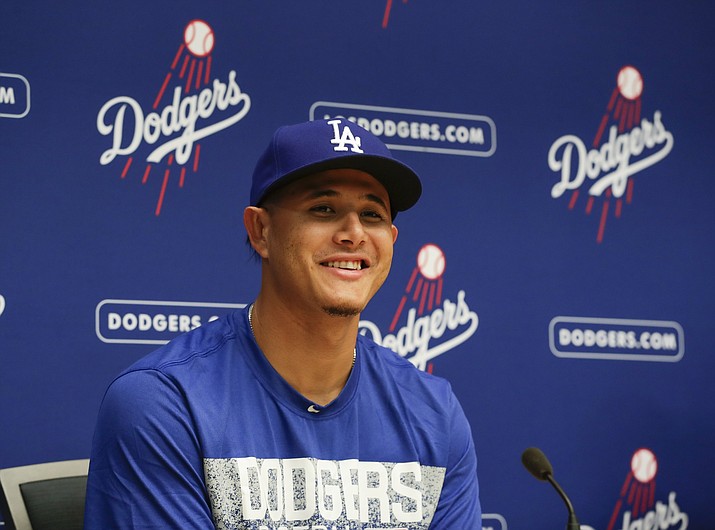 MILWAUKEE — It’s a whole new beginning for Manny Machado after months of uncertainty. Perfect time for a new number, too.

One with an LA story and a Baltimore past.

Machado joined the Los Angeles Dodgers on Friday after being acquired in a blockbuster trade with the Orioles during the All-Star break, putting one of baseball’s premier players on one of the game’s marquee teams. He started at shortstop and hit second in the lineup, ahead of young slugger Max Muncy and old friend Matt Kemp for the opener of a three-game series at Milwaukee.

Muncy thought he might hear from Machado about his No. 13 after the deal, and he joked about possibly just having a new jersey when he arrived at Miller Park. But the 26-year-old Machado decided to try No. 8 with the Dodgers — Kobe Bryant’s first number with the Los Angeles Lakers, and the same number Hall of Fame shortstop Cal Ripken Jr. wore with the Orioles.

A nod to his past and his future.

“I wanted to change it up,” said Machado, who singled and walked in his first two plate appearances with his new team. “New beginning, new journey, new team, so I wanted to go that route. At the end of the day, I have to throw an athlete out there. Huge Kobe fan growing up.”

Bryant won five NBA titles in 20 seasons with Los Angeles, while the Dodgers haven’t won the World Series since 1988. That elusive championship is clearly on the minds of everyone with Los Angeles after the deal for Machado.

“It’s nothing we haven’t had every year that I’ve been here. It’s the same,” Dodgers manager Dave Roberts said. “We’re expected to win the World Series. That hasn’t changed.”

It’s a much different situation for Machado, who went from one of baseball’s worst teams to the top of the NL West heading into the weekend. Machado made it to the playoffs twice with Baltimore, losing to the New York Yankees in the 2012 AL Division Series and falling to Toronto in the wild-card game two years ago.

The Dodgers are trying for their sixth consecutive division championship. They lost to the Astros in the World Series last year.

“I’m here to win. At the end of the day I want to win a ring,” said Machado, who is eligible for free agency after this season. “Everyone in there wants to win a ring. They fell a little short last year and they want to get back and win it. Whatever I can do to make the process easier or better as a team, I’m all for it.”

The Dodgers, who optioned outfielder Andrew Toles to Triple-A Oklahoma City to make room for Machado, are just looking for more of the same from the four-time All-Star.

Machado hit .315 with 24 homers and 65 RBIs in 96 games with Orioles while making a seamless move from third base to shortstop.

“I think everybody knows what he’s capable of doing. His track record speaks for itself,” Kemp said. “He’s one of the best right-handed hitters in baseball, one of the defensive players in baseball. I mean his accolades, it’s pretty impressive for as young as he is.”

Machado and Kemp snapped a selfie together during Tuesday’s All-Star Game in Washington.

The Dodgers and Orioles finalized the swap for five prospects the following day, but Machado said the picture had nothing to do with the possible deal.

“It was kind of out there a little bit,” he said. “It was possible, not 100 percent sure. I just wanted to take a picture with everyone who was on second base and it just happened to be that Matt was the first one to get there. Me and Matt go way back, taking a picture with him, those memories will never be forgotten.”

Now they get a chance to make some more memories.

Roberts said he plans to play Machado at third at some point, and the two-time Gold Glove winner was receptive to the idea of some time at his first position in the majors.

But he wants Machado to get acclimated to life with the Dodgers first.

“It’s exciting,” Roberts said. “I messed with a lot of different lineups. Obviously he makes our club considerably better.”