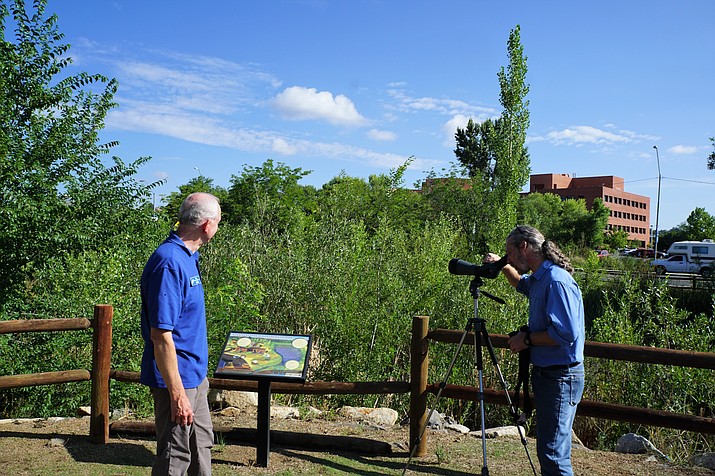 Eric Moore, owner of Jay’s Bird Barn, left, and Michael Byrd, the executive director of the Prescott Creeks organization, check out the new optical equipment that was donated to the organization by the Vortex Optics company. The equipment was among the needs that Prescott Creeks had after a December 2017 fire destroyed its log-cabin office along Highway 89. (Cindy Barks/Courier, file)

When fire destroyed Prescott Creek’s log-cabin offices late last year, much of the organization’s supplies and equipment went with it.

That meant that the organization whose mission, in part, is to manage the bird sanctuary of Watson Woods was left without the field-work basics: binoculars and scopes, as well as camera equipment, GPS units, and field guides.

Over the past seven months, the creek-advocacy organization has been piecing together the needed equipment through community donations. A list on Prescott Creeks website, www.prescottcreeks.org, shows the steady progress, with a number of the needed items crossed off the list.

Michael Byrd, executive director of Prescott Creeks, says the organization has been functioning from a much smaller cabin located at the site of the old office along Granite Creek.

Although the organization has “tried to stay as focused on our mission-related work as we can,” Byrd said the lack of equipment has frequently hindered those efforts.

In a December 2017 photo, Prescott Creeks Executive Director Michael Byrd stands in front of the burned-out log cabin that had served as the organization’s office for about four years. Since the fire, Prescott Creeks has downsized into a smaller cabin near the old log-cabin site along Highway 89. (Cindy Barks/Courier, file)

Recently, a local business stepped in to help with an aspect that is important to the “Important Bird Area” designation of Watson Woods, the grove of trees and foliage at the southern end of Watson Lake.

Eric Moore, the owner of Jay’s Bird Barn and a local birding expert, said his store regularly collects donations for local nonprofit organizations with a birding or environmental focus.

Each month, Moore changes the designated nonprofit organization on the donation jar that sits on the store’s counter. Over a month, he said, the jar typically collects $100 to $200 dollars.

When Prescott Creeks’ turn came up, Moore learned of the organization’s need of new optics equipment.

That prompted Moore to reach out to Vortex to see if the equipment that had burned in the fire might be replaced.

The company immediately responded that it would donate all of the replacement equipment, including a scope, a tripod, and two binoculars — with an estimated total value of nearly $1,000.

“Part of the monitoring at Watson Woods is to look at the bird life,” Byrd said, noting that the restoration of the riparian habitat helps to attract a wider variety of birds.

Moore added that the woods offer one of the best spots in the area for migratory birds.

“Watson Woods is excellent” for birding, he said.

Another of Prescott Creeks’ missions is to achieve a healthy watershed and clean creeks, and the organization has developed several “micro-basins” of native vegetation and sandy retention areas to help filter runoff water before it gets to the creeks, and ultimately, to Watson Lake.

This past week, Byrd and Moore met at one of the most visible green-infrastructure sites — located at the Four-Points intersection in front of the Taco Bell restaurant on Miller Valley Road.

About five years ago, Prescott Creeks oversaw the planting of more than 100 native trees and shrubs, and since then, the busy street corner has flourished into an “urban jungle” says Byrd.

Using the new Vortex equipment, Moore pointed out a variety of birds that frequent the area, including a blue grosbeak and a common yellowthroat.

Along with the optics equipment, which has now been crossed off Prescott Creeks’ list of needs, the organization still needs a host of office supplies and field equipment.

Under its quick link to “fire recovery needs,” the organization’s website lists items, such as office furniture, a laptop computer, cameras and lenses, and a variety of field guides.

Meanwhile, Byrd said the organization is also working on finding a permanent home.

“It’s been our desire to stay in that area,” Byrd said of the creekside site. “Its proximity to Watson Woods has been really great for us.”

Among the new line items in Prescott Creeks’ budget is rebuilding of a physical site, Byrd said.