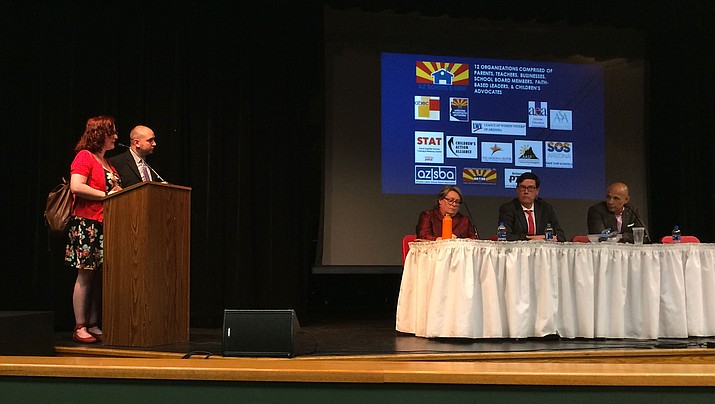 Republican frontrunner, Gov. Doug Ducey, seeking re-election to a second term, and his fellow Republican challenger and former Secretary of State Ken Bennett, were invited to the forum but neither attended the Tuesday event in Prescott Valley. The only other gubernatorial candidate is Angel Torres, a Green Party write-in candidate.

Like many of those in attendance, Denman came to exercise her right as a voter to hear first-hand from the candidates their stands, particularly as it relates to education, so she is able to make a suitable choice for who she thinks should be the state’s next leader. The Republican and Democratic primaries are scheduled for Aug. 28 with the general election on Nov. 6.

She said she saw the forum as a “great opportunity” to hear the candidates share their backgrounds and political philosophies, as well as answer questions, about their educational priorities. Going forward, she said all-comers can now continue to explore who they might wish to support in the coming election.

A number of audience members were wearing the #RedForEd shirts, and a handful submitted questions asking the candidates to outline how they will elevate and push for improvement in public education.

One questioner, Jennifer Hernandez, who works for Expect More Arizona, asked about pre-K funding, and all of the candidate agreed that investment in early childhood education is a must.

Candidate Steve Farley, now a state senator, said he finds it offensive that there are still places across the state where all-day kindergarten is not fully funded for all communities.

When 1 in 4 children in Arizona lives in poverty, Farley said it is clear that more need education as their chance to succeed.

They all oppose an expansion of educational vouchers, endorse professional salary rates for educators and encourage lower class sizes so as to enhance instruction for all students. They all also concur that the current year funding formula required by the state Legislature is a flawed financial strategy that hurts rather than helps public education.

What set them apart was rooted in approach, some philosophy, and experience.

Farley, of Tucson, touted his 12 years in the Legislature — six in the House and six in the Senate where he is now the assistant minority leader and ranking member of the Senate Finance Committee — as the political experience required to unseat Ducey. He was firm that education must be the state’s top priority, and as the son of two public school teachers will do what needs to be done.

“I have a fire in my belly, and I also speak pretty good Republican,” Farley said of being able to garner bi-partisan support when necessary.

The public is tired of the constant political sniping that is occurring in the state and nation, he said. What they want is “grownups in the room to solve our problems.”

Fryer, the first Democrat to announce her candidacy, touts her 29 years of experience as a change agent for nonprofits, religious entities and people on the fringe who need someone to speak out for them.

She was the only candidate who voiced interest in not only halting expansion of vouchers for private schools, but was adamant that charter schools need to be “transparent, accountable and rare.” In her view, public school funding should be aimed at district schools required to provide education to all, regardless of socio-economics, color, race or creed.

“We have to make the best schools for every kind in the neighborhood,” Fryer said.

As for the teachers in the room, Fryer said, “Not only do I have your back, I have the experience to get this done.”

A Latino who was the first in his family to earn a college degree, and who is an Arizona State University professor who lost his bid against Republican Diane Douglas for Arizona superintendent of public instruction in 2014, David Garcia said he has the educational pedigree to assure Arizona moves from the bottom when it comes to its commitment to public education.

What has proven to be Ducey’s weakness — propelling Arizona’s public education agenda forward — “is my strength,” Garcia said.

Garcia noted he has been a proponent of the “Invest in Education” ballot effort from the very start, and has the expertise and commitment to closing corporate sales tax loopholes that would provide the dollars needed “to create amazing public schools.”