Optimist Club of Yavapai County bringing out the best in youths 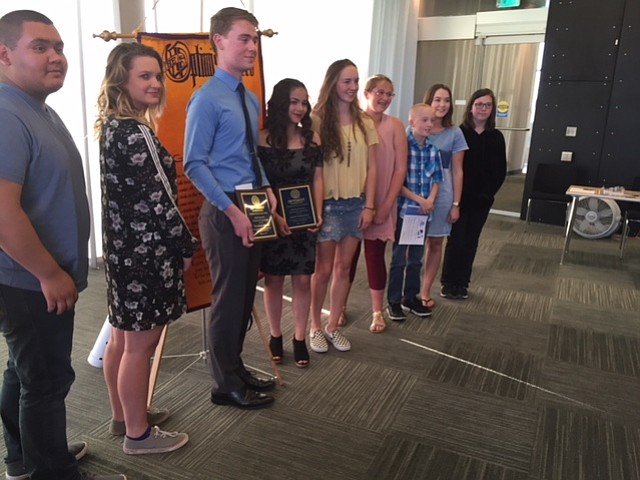 The Optimist Club of Yavapai County recognized outstanding youths from the quad-city area May 3, 2018. (Courtesy)

The Optimist Club strives to recognize students who otherwise may not be recognized for their positive impact on those around them. Youth Appreciation is intended to honor students who are good citizens, support other students, are active in their community, have demonstrated leadership and have overcome challenges.

The High School Youth of the Year is Thaddeus Martin a senior at Bradshaw Mountain High School. According to Kort Minor, BMHS Principal, Thaddeus is an incredible student and leader. He was the President of the National Honor Society, Vice President of the Interact Club, involved with packing nutritious meals for the “Feed the Starving Children” campaign involved with the LINK program where he “adopted” eight incoming freshmen and made sure they were successful in transitioning to high school. He was a finalist for the Prescott Area Leadership’s Youth of the Year award as a junior, he was named as an AP Scholar and was this year’s Class Valedictorian. As a young child Thaddeus’ mother developed a notably aggressive form of breast cancer. This brought severe hardships to the family with her uphill battle against the disease. She won the fight; however, the treatment that kept her alive was the same treatment that has stolen what most people take for granted. Her nerves were permanently damaged and she developed severe neuropathy causing her bipolar disorder to spiral out of control. As a result, a few years later the family lost their home due to the significant medical bills and the crash in the housing market. Shortly after the family purchased another home, his mother’s cancer returned, again she defeated it but the form of cancer is extremely aggressive and it is not a matter of “if” her cancer will return but “when”. Thaddeus’ family still deals with the consequences of the past and struggles financially to make ends meet and this is why they have had to move so many times during Thaddeus’ high school career. Thaddeus is very proud. If you speak with him he will probably never bring up his family struggles and by the smile on his face you would never have guessed it. These setbacks have failed to limit Thaddeus’ personal growth and have proven to be invaluable to molding his ambition and mind set. After seven semesters of high school, Thaddeus was number one in his class with a GPA of 4.740!!

The Middle School Youth of the Year is Isabel DeHerrera, an eighth-grade student at Glassford Hills Middle School. According to Claudia Chavira, who nominated Isabelle, she has demonstrated leadership and social conscience ability on the GHMS campus. She is a member of the AVID Leadership Club and role models the AVIDTUDE on our campus. The Advancement Via Individual Determination is a college readiness system where students learn organization and study skills, develop critical thinking skills, and focus on activities that center on college and higher education. Outside of school Isabel is an active volunteer at her church with the special needs children and she volunteers for other school events as needed. You will often see Isabel walking around campus leading her brother; both laughing and smiling. Jesse has multiple disabilities. Isabel has learned sign language to communicate with him and has been observed teaching her peers a few signals to communicate with her brother too. This year has been a difficult year for Isabel.

Her mother was in a terrible accident and suffered a serious brain injury and was hospitalized for quite a while. She has since recovered, but Isabel did what she could to support and ease her mother’s recovery. Overall, Isabel is a stupendous human being. She is joyful and encourages those around her, regardless of what is being thrown at her.